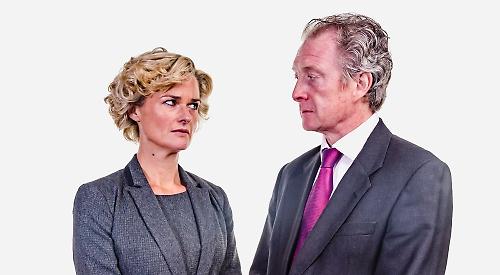 AN actress from Pyrton is determined to carry on performing as she prepares to undergo surgery for the 10th time.

Liz Mente-Bishop, 47, has been preparing to go into hospital next week by appearing on stage in Oxford this week.

She has been playing the prime minister and the ghost Diana, Princess of Wales in the Oxford Theatre Guild’s performance of King Charles III at the Wesley Memorial Church.

She was offered the roles just two days before being told she needed joint replacements in both her big toes and wouldn’t be able to walk for months.

Mrs Mente-Bishop, who lives with her husband Murray, children Dillon and Kyra and stepdaughter Holly, asked for the operation to be delayed as she desperately wanted to perform before being forced to take such a long time off work.

She has previously had three hip operations as well as spinal, leg, shoulder and knee surgery following a climbing accident in the French Alps 14 years ago.

Despite this, she has appeared in a number of plays and films.

Mrs Mente-Bishop said she was looking forward to recovering from her latest operation, which will be carried out at the Manor Hospital in Oxford on Monday. She said: “I’ll stay in overnight and then when I come home I’ll have to lie down with my feet elevated and only be able to get up for a couple of minutes.

“I’ll have crutches but I’ll have to put the weight on my heels. I’ve just got an office wheelie chair and I’m going to wheel myself to the toilet!

“I have turned my dining room into a bedroom so I don’t have to use the stairs and our freezer looks like a supermarket with all individual meals in there.”

She will spend six to eight weeks in protective and supportive boots but should be able to walk again after 12 weeks. She hopes to return to acting in January.

Mrs Mente-Bishop last performed on stage at last year’s Camden Fringe with her show Outbursts, a collection of four short, dark comedic plays. King Charles III explores the clash between crown and state. With Elizabeth II dead, the new king finds himself torn between his own political views and the ceremonial role the monarchy plays within Parliament.

Mrs Mente-Bishop said: “It’s an interesting concept in that so many people in Britain wonder what Charles will be like as king having waited so long.

“I actually wasn’t going for the part of Diana because they were looking for someone 35 or under because she was 36 when she died.

“The prime minister in the play is actually male but the director put out the casting call for both sexes and I thought, ‘I’d make a jolly good PM’. The director said, ‘I think you would be really suited to Diana’ so my hair is currently shortish and blonde. The role of prime minister is pretty key. What I like about it is strength of character, being in that powerful position to show leadership and take that side of me into the role.

“On the flipside, what’s so nice is taking my vulnerability to Diana. There’s just a couple of Diana scenes but they are quite fundamental to the whole play.”

She added: “The rehearsals have been great fun. There’s 16 of us so it’s a big cast and it has been an absolute joy.”

It is not the first time that surgery has affected her career. In 2014 she suffered a prolapsed disc in her spine and had to have a spinal fusion.

She had been given the lead role in a short film called Visionaries, based on a true story of a blind person who had surgery to give them their sight back.

Mrs Mente-Bishop said: “I was determined not to pull out so two weeks after surgery we started filming. Fortunately, we were using my house for a lot of the scenes so I laid in bed while they set up then got up, filmed my scenes and got back in bed.”

She added: “I spend a minimum of three months every year recovering. It makes it very difficult to build a career — just when I start to get things moving again I have to go back into surgery so it is frustrating but the show must go on!”