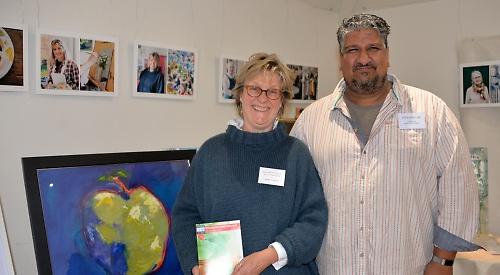 HUNDREDS of people attended a preview event for the inaugural Watlington Artweeks.

Forty-four artists will be showcasing their work across 20 venues from next Saturday (May 11) to May 19.

They all displayed one piece of work at the preview on Friday night and Saturday during the day at the Watlington Club in the High Street. This included sculptures, paintings, textiles, photography and ceramics.

Jaine McCormack, one of the organisers, estimated that about 400 people had visited over the two days. Visitors included Henley MP John Howell and actors Jeremy Irons and Sinead Cusack, who live in Hill Road.

Mrs McCormack, an artist, designer and stylist of home textiles and interiors who lives in Christmas Common, said: “I was really thrilled. I think we could say it was a triumph.

“We thought because it was the first time Watlington had had an event for Artweeks we’d get the local community on board. That’s been one of the really fabulous things about this event is the number of people who have come out of the woodwork and are showing their work for the first time.”

The preview also featured an exhibition of photographs taken by Eva Nemeth, from Cuxham. She took portraits of the other artists and these were then placed alongside a piece of the artist’s work.

Mrs McCormack said: “Rather than just a line-up of artwork it gave personality and identity to all the pieces.” Almost all the venues are in Watlington, with just one venue outside of the town at Babylon Plants in Cuxham. The majority will be open from 9.30am until 6pm each day.

The other organisers are Loraine Daniels, who runs lighting shop Bella Luce, David Cotterell, who runs Apex Healthcare Consulting and sculptor Satnam Bains, an IT specialist.

Mrs McCormack thanked the community for supporting the preview event and The Social bar and restaurant, based at the club, for providing complimentary food.