Protest at meeting over plans for 183 new homes 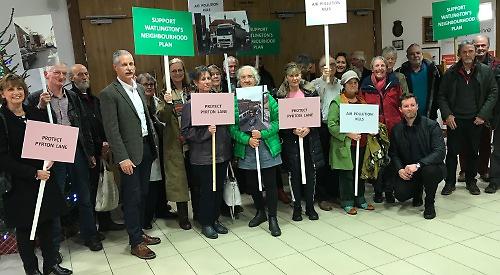 MORE than 40 people attended a meeting to protest at plans for 183 homes in Watlington.

Archstone and Bloor Homes want to build on a former pig farm between the B4009 Britwell Road and the B480 Cuxham Road.

Their application was considered by South Oxfordshire District Council’s planning committee on Wednesday last week, although it couldn’t make a decision as a public inquiry is to be held in January after the companies appealed because the council failed to decide the plans in the required time.

They claim the application would conflict with the plan, which passed a referendum last year, and ignores the cumulative impact of thousands of new houses on air quality in the town.

The site is one of three earmarked for development in the plan but any development must include a section of a proposed bypass or “edge road”.

However, the route of the road has been changed in the companies’ latest application.

The road would go from the B4009 Pyrton crossroads in the north to Britwell Road in the south. It would run north of the pig farm, cut across Cuxham Road and then go through two other sites, where Providence Land wants to build 130 homes, before joining the B4009.

The companies propose that traffic uses the industrial estate spur road, off the Cuxham Road roundabout, saying this is in response to a request by Oxfordshire County Council, the highways authority.

In her report to the committee, planning officer Emma Bowerman said she would have recommended the application was approved.

She said the developers had worked with the county council to develop “solutions” to the short-term traffic impact of the development until the bypass is built. These included the removal of two stretches of on-street parking, one in Shirburn Road and the other in Couching Street.

There would also be pedestrian and cycle paths linking the development to the town centre and a new bus stop in Cuxham Road to encourage use of public transport.

Councillor Andrew McAuley, chairman of Watlington parish council’s planning committee, told the committee: “We object because it is not compliant with the objectives in the neighbourhood development plan, which is part of the district council’s Local Plan.

“It addresses very real concerns about traffic, congestion and pollution. Levels are already at, or exceeding, national objectives.

“It is accepted by all that completion of the edge road will deliver a reduction in pollution but without it there is a very real risk to the future of Watlington. If you don’t recognise the legitimacy of our neighbourhood plan, then what is the point in us having it?

“Watlington’s pollution levels have been consistently at or above national levels but despite this nothing has been done in the last 10 years to reduce pollution.

“We need to divert the majority of traffic away from the town centre. The edge road is the only way to reduce pollution.

“We also object to the amended layout of the site and the addition of the second access route. Additionally, the use of the access on Cuxham Road will increase traffic and this is totally unacceptable.

“We are very concerned that a main road runs through the development. Watlington suffers from considerable congestion at peak times and not from within our own community but from the B4009. Watlington acts as a funnel and we are the short end of it.”

He asked the committee to restrict the number of homes to be occupied before the bypass is fully in use to one third. Members agreed to submit this to the inspector who will hear the appeal.

Liz Harris, of St Leonard’s Close, Watlington, said: “No consideration has been given to the negative effects of increased traffic on Pyrton Lane. Whatever changes are made, Couching Street will always receive a heavy volume of traffic. Installing a few speed bumps will not cause congestion to disappear.”

Councillor Anna Badcock, Watlington’s representative on the district council, was not at the meeting but a statement from her was read out.

It said: “All parties involved have been working on a solution for a longer-term strategy for traffic in the town centre of Watlington.

“Watlington has a town centre dominated by listed buildings and all of these are being damaged on a daily basis by the volume of traffic.

“We have to decide if it is criminal if we are allowing traffic volumes to rise by granting planning permission. There has been a worrying U-turn by Oxfordshire County Council which, until August, opposed any development in Watlington until a relief road was built. This about-turn is concerning as no extra evidence has been provided.”

Councillor Jo Robb, who represents Woodcote and Rotherfield ward, said: “The edge road took many years to develop and was a community plan. They consulted with their community all the way through and it is very clear that the use of Willow Close roundabout was going to be very divisive.

“The only reason why these houses are suggested and appear in the neighbourhood plan is because they want an edge road and the only way to fund it is through a developer contribution.

“It seems to me as if the county council is attempting to overrule the decision made by the parish council in its neighbourhood plan.”

Councillor Peter Dragonetti proposed the motion to follow Mrs Bowerman’s recommendation but said he did so “with regret”.

He added: “The objections that we had on the basis of air quality have been removed.”

Members voted by eight votes in favour of the recommendation with none against and one abstention.