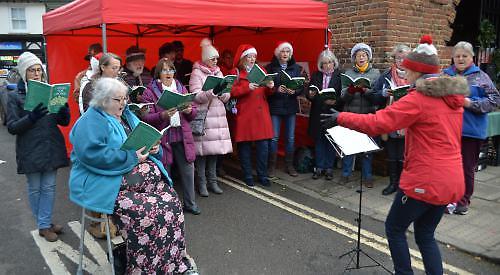 There were more than 30 stalls as well as children’s entertainment and a raffle drawn by acting couple Jeremy Irons and Sinead Cusack, who live in the town.

The day began with the traditional parade along High Street after Father Christmas arrived in a fire engine at the top of the road by the town hall.

He was followed by children from the Performanze dance school and pupils of the primary school, while the Watlington Concert Band entertained the crowd.

He then made his way to his grotto, which was located in a resident’s garage in High Street rather than the parish office in Old School Place.

In the Watlington Club there was a range of craft stalls while High Street was filled with food and drink stalls, including a barbecue run by Calnan Brothers butchers, baked goods from the Orange Bakery, chocolates from Tutu Delicious and goulash and glühwein from the Fat Fox Inn.

Charities and other organisations, including the Beacon Festival, the Watlington Climate Action Group, Watlington Primary School’s PTA and Mercy in Action were also promoting their work. The market is organised every year by the Watlington Business Association in aid of the lights and trees in High Street as well as charities. This year, it was supporting Watlington Youth Club.

Robin Holmes-Smith, who runs The Granary café and deli and is one of the organisers, said: “It went very well.

“I think the numbers were up a little bit on last year and people stayed around a bit longer thanks to the weather. People do tend to spend a lot of time at the market, where they get to see everyone and have a good chat. It’s a very sociable town anyway but this gives outsiders a chance to see what Watlington has to offer in its High Street, which has a lot of very good independent shops.”

Mr Holmes-Smith said the business association was now considering organising an event such as a fair or ball in the spring or summer.