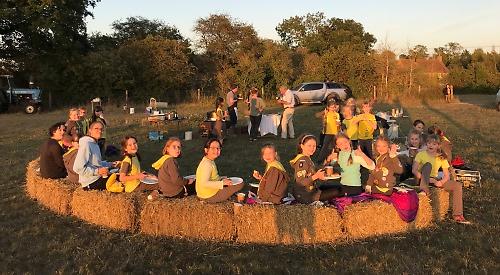 BROWNIES from Watlington spent an evening learning about wildlife and conservation.

The event, held at Lower Farm in Britwell Salome, was organised by Catherine Glenn, the group’s brown owl.

The aim was to demonstrate the importance of providing food and nesting sites for birds and the dwindling population of barn owls in particular.

The brownies were shown an occupied nesting box in a barn and then some rough grassland where they enjoyed searching for field voles’ nests and runs.

In the farmyard they saw a brood of chicks and enjoyed playing among the hay and straw bales in a Dutch barn.

They were given a close-up view of farmer John Mearns’s combine harvester in a field.

As they sat down for a barbecue supper, they were shown a pile of rubbish that Paul Sargeantson, who lives at Lower Farm, had picked up from the verges on a 200-yard stretch of the the B4009. Mr Sargeantson said: “Their reaction was of disbelief and they expressed deep concern for the effect this was having on the environment. When questioned as to the rubbish’s origin they were quick to proffer that it had been thrown from passing vehicles.”

Mr Sargeantson said it was important to educate children on the subject as the only means of reducing the “scourge” of littering in future.

The brownies then enjoyed the barbecue, which was provided by Andrew and Eilidh Ferguson, who run catering company Cuxham Mill.

Mr Sargeantson added: “There is now irrefutable evidence that the opportunity for children to commune with the countryside in ways such as this provides a significant boost to their wellbeing and learning ability.

“Those kind people who give their time — invariably outside their full-time jobs — to helping the brownies, guides, cubs and scouts throughout the land deserve our sincere appreciation and admiration.”