Hairdresser prepares for retirement... but not just yet 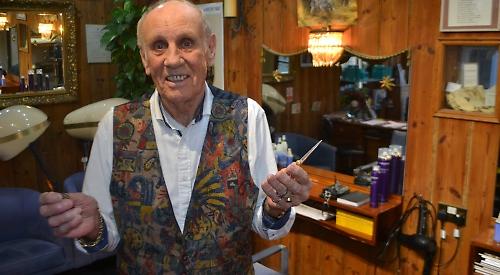 A HAIRDRESSER in Watlington is planning to turn his salon into part of his home for when he retires.

James Gerring, who runs Hair by James in Shirburn Street, has applied for planning permission to merge the space with the existing residential part of the property, where he already lives.

However, the 77-year-old says he plans to continue working for at least another two years.

The application to South Oxfordshire District Council, the planning authority, says: “He is planning to retire, so there is no loss of employment due to this change of use.

“No alterations to the building are proposed, including to the shopfront and street frontage.

“There is therefore no impact on the character of the designated conservation area.”

Watlington Parish Council did not object to the application but said it was “regrettable” that the town would lose a business premises. Mr Gerring, who has been cutting hair for 50 years, said he had not yet set a date to retire.

“It certainly won’t be for the next two years,” he said. “I’m well enough and I’ve got very longstanding clientele.

“It’s planning for the future really because, obviously, I won’t be going on forever. I love and look forward to every day.”

Mr Gerring has run Hair by James in the town since 1984, having started the business in Reading in 1970.

He began cutting hair as an apprentice at Thomas & Co in Reading when he was 15 and managed a salon called Greco in Bell Street, Henley, from 1962 to 1969. He then moved to Marlow where he managed Robina Hair Care for a year before going it alone.

He had a branch of Hair by James in Duke Street, Henley, from 1976 to 1984 before moving to Watlington.

The district Council is due to make a decision by February 5.