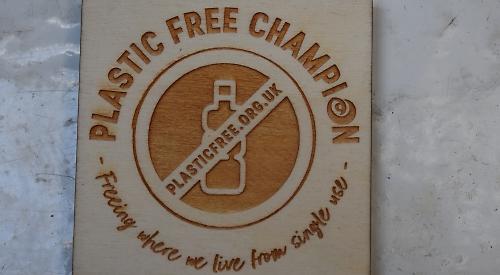 A BUTCHER in Watlington has been recognised for its contribution to the environment.

Calnan Brothers in High Street has been named a “plastic-free champion” by Surfers Against Sewage, a marine conservation charity and campaign group.

Owner Tom Calnan said: “We are a family business that is evolving all the time.

“Everyone’s a bit more conscious about single-use packaging and we have taken a couple of small steps to improve ours. It’s all recyclable and it keeps the product better because plastic makes meat sweat if it’s kept there a long time so it’s win, win.

“We used to put our turkeys in plastic bags but now put them in a cardboard box.”

Mr Calnan, who is chairman of the Watlington Business Association, praised the efforts of other businesses in the town to reduce their impact on the environment by using paper bags and urged residents to “shop local”.

He said: “You go into supermarkets and all the packaging is horrific. Think about a supermarket chicken — it’s in a plastic tray with a plastic covering.

“People will come in here three times a week and will buy what they are going to eat so you’re cutting down on food waste.

“All our stuff is fresh daily so there’s never any wastage.

“Local shops have more control over their produce compared with supermarkets.

“The bigger message is ‘shop local’ and without knowing it you’ll be doing more for the environment.” Mr Calnan said that in future he wanted to use biodegradable trays for his shop’s ready meals and purchase an electric van as his next vehicle.

He also wants to encourage customers to bring in reusable trays for items such as a rib of beef, which is too large to put in a bag.

Mr Calnan said: “It’s good for society and good for the world.”

Nicola Schafer, who co-chairs the Watlington Climate Action Group, said: “I’m delighted to see Calnan’s get this award and be the first one to achieve this status in Watlington.

“It’s really important for businesses to get this recognition because it’s not always cheap and easy to move away from plastic.

“You don’t have to go completely plastic-free to make a difference. It’s all about making positive changes.”

The group, which was formed in April, has a tool kit with useful suggestions for businesses on how to reduce single-use plastic and can support participants in the process.

If you are a business and would like to take part in the project, email plasticfreewatlington@
gmail.com