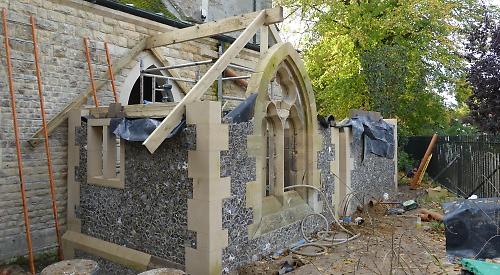 A NEW £280,000 extension to St Leonard’s Church in Watlington is set to be completed today (Friday).

The addition of two new toilets, including one for disabled users, and a kitchen will mean it can be used by the wider community.

The church says this will enable it to host more events and generate income, helping to ensure its survival.

The project dates back to 2012 when planning permission for a £150,000 extension to the Grade II listed church was granted.

The parochial church council said it wanted to equip the church with modern facilities and make it a cultural and community resource as well as a centre of worship.

Churchwarden Mike Gardner said: “We wanted to use the church much more than on a Sunday morning. We wanted it to be a community building open to all sorts of events, secular as well as religious.

“To do that we needed to update the facilities because we had no kitchen and there was one loo through a series of narrow doors and up a step, which wasn’t disabled-friendly. We decided what we wanted to do was put an extension on the north aisle with a kitchen and disabled facility.”

In order to fund the extension, the church approached the Maria Cook Trust, a church charity which owns land adjoining the Pyrton Lane church where the old church hall used to be. At the time the Seventies-built hall was coming to the end of its life and was being used less and less.

The roof was slipping and the estimated cost to repair it was about £100,000, which the church couldn’t afford.

The trust agreed to sell a parcel of the land to the Diocese of Oxford on which it would build two new houses in order to fund the extension.

In 2017 planning permission was granted for demolition of the hall and for a new five-bedroom house and new rectory in its place.

The rectory will replace the old one in Hill Road, which has now been sold by the diocese. The two properties are expected to be finished in April. The development also includes a car park with 22 spaces and an overspill on a grassed area and a footpath leading to Mason’s Wood, near Church Street.

The rector, the Rev Daniel Thompson, is currently living in rented accommodation.

Work on the extension has taken seven months to complete. Mr Gardner said: “I’m absolutely delighted that we have finally got there and I’m looking forward to being able to use it and increase the amount of community use that we’re able to bring in.

“We need to be increasingly a part of our community if we do not want to become isolated and irrelevant.” Fellow churchwarden Nigel Paterson said: “There’s going to be a whole load of development in Watlington so St Leonard’s is once again going to become the centre of the community.

“We didn’t have any accessible toilet facilities so it severely limited what we could do in actually opening the church for wider things other than the Sunday service.

“It costs about £1,000 a week to maintain the building and pay our costs. Anything we can do to contribute to that fixed cost will help us maintain it for future generations. It is right that this church is looking forward, not back.”

Both churchwardens praised the quality of the work undertaken by architects Acanthus Clews, of Banbury, building contractor Fennell Blake, from near Headington, and the other contractors.

The extension will be officially opened by the Rt Rev Colin Fletcher, the Bishop of Dorchester, on March 3.

The occasion will be marked with an exhibition of pictures of the extension being built by Watlington photographer Dee Robinson.

Mr Paterson said that in future the church wanted to build a ringing platform in its bell tower as well as installing a new heating system to replace the gas boilers.