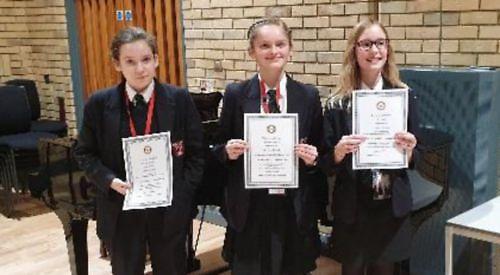 THREE teams from Icknield Community College in Watlington took part in a heat of the Youth Speaks competition.

The public speaking contest was held at Wycombe Abbey School and also featured teams from Wycombe High School and the Royal Grammar School in High Wycombe as well as the host school.

The teams of three — a chairman, proposer and opposer — were given 15 minutes to present the key points of a debate on a topic of their choice.

Liv Carter, Hannah Arnold and Ariane Richards represented Icknield’s year eight team in the intermediate section and discussed whether adulthood was a state of mind.

Year nine was not able to compete due a clash with an options evening but year 10 pupils Sian Carrington, Alex Wooster and Saoirse Brady debated whether teenagers lacked confidence in the senior section.

The competition was won by Wycombe Abbey School which will go on to the next round of the heats.

Teacher Jacqui O’Reilly said: “The competition is tough — the other competing schools are state selective or private but I am always incredibly proud of our students.

“They were impeccably presented, spoke with assurance and knowledge and, in short, were outstanding ambassadors of the school.

“Although none of our teams progressed through to the next round, as Hannah said, ‘it’s the taking part that counts’. It’s partly self-esteem, it’s building confidence and being able to argue a point in a reasonable manner.

“I’m delighted that they are doing something that’s well out of their comfort zone and in an area they are not familiar with and giving it their best shot.”

The annual Youth Speaks
competition is organised by Rotary and designed to help young people develop their self-confidence and presentation skills. It culminates in a national final.