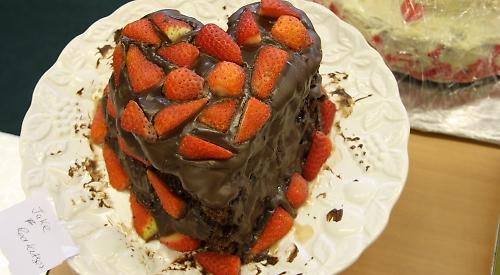 A VALENTINE’S Day bake off competition was held at Watlington Primary School.

There were about 70 entries in the contest, which was judged by 15-year-old Kitty Tait, who runs the Orange Bakery in High Street with her father Alex.

There were prizes of two free pastries from the bakery for each winner in the cakes, traybakes, cupcakes and alternative categories. The 70 entries included heart-shaped cakes, brownies and biscuits which were sold at the end of the school day.

Kitty, a former pupil who has been baking for 18 months, said she was impressed by the entries.

“When I was their age I couldn’t bake any of what I’m seeing on the tables here. I like to see how some children think so far outside the box.” Isla Smith’s “dog and cat cake” won the alternative category. It was made for pets, with dog treats in one half and cat treats in the other.

Her daughter Sophie was one of the winners with her heart-shaped cupcakes topped with handmade white chocolates containing hundreds and thousands. The other winners were Emma Gibson, Santa and Roxy Pereira, Gianna Fernandez, Paige Wood, Joshua Bew, Noah Speight, Marley Fanning and Charlie Challis.

The event raised £420, which will go towards playground equipment and new sheds at the school.

• Kitty has been nominated for the Robyn Jones Courage Award in this year’s Sue Ryder women of achievement awards.