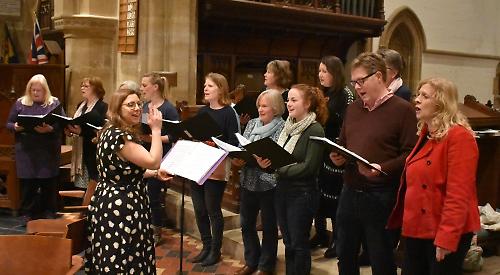 AN extension at St Leonard’s Church in Watlington was officially opened by the Bishop of Dorchester.

The Rt Rev Colin Fletcher blessed two new toilets, including one for disabled users, at the church in front of about 100 guests who then gave three cheers.

The £280,000 project also includes a new kitchen, meaning the church can be used by the wider community.

The church says this will enable it to generate more income from events, helping to ensure its survival.

The Bishop said: “I think it’s really great. It’s part of the story of this church because they have been wanting to make it more of a real community facility for the town and this takes it to another level.

“It’s very hard to justify having a building that can only be used on a very occasional basis. Churches need to be available to pray privately as well as for services but also for lots of other community events.

“Historically the church, particularly the nave, was used for all sorts of things. We’re only going back to what we were doing centuries ago.

“Now the hard work begins because just by making a building more useable doesn’t mean it will be better used.”

Rev Daniel Thompson, rector of Watlington, said: “This has been a long-running project. It really puts us in the centre of the town again as a new resource.

“It’s not about worshipping on Sunday, it’s absolutely a gift to the community. It really represents a sense that the church has a future.”

Rev Thompson praised the quality of work by architects Acanthus Clews, of Banbury, building contractor Fennell Blake, from Headington, and other contractors.

Christopher Evans, the former rector of Watlington who retired in 2016 after almost 30 years and oversaw much of the project, said: “I’m absolutely delighted to see the wonderful extension to the church, which has been long-needed and long-wanted.

“It’s going to be a huge asset, not only to the church itself, but the whole community. There’s a growing realisation that churches today need not only to serve the worshipping community but the population.” The evening ceremony included a performance by the Sing Yourself Happy Choir who performed songs including Big Yellow Taxi by Joni Mitchell, Let it Be by the Beatles and California Dreamin’ by the Mamas and the Papas.

There was also an exhibition of photographs taken by Dee Robinson during the building process.

The project dates back to 2012 when planning permission for a £150,000 extension to the Grade II listed church was granted.

The parochial church council said it wanted to equip the church with modern facilities and make it a cultural and community resource as well as a centre of worship.

The church had no kitchen and there was only one toilet accessible through a series of narrow doors and up a step, which wasn’t
disabled-friendly.

In order to fund the extension, the church approached the Maria Cook Trust, a church charity which owns land adjoining the Pyrton Lane church where the old church hall used to be.

At the time the Seventies-built hall was coming to the end of its life and was being used less and less.

The trust agreed to sell a parcel of the land to the Diocese of Oxford on which it would build two new houses in order to fund the extension.

In 2017 planning permission was granted on appeal for demolition of the hall and for a new five-bedroom house and new rectory in its place.

The rectory will replace the old one in Hill Road, which has now been sold by the diocese. The two properties are expected to be finished next month.

The development also includes a car park with 22 spaces and an overspill on a grassed area and a footpath leading to Mason’s Wood, near Church Street.