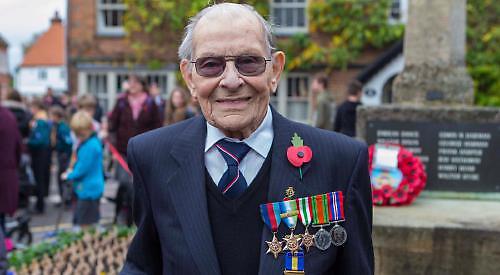 He was the third of four children with an older sister and brother, Olive and Gill, and a younger brother, Reg.

Ken was born in Kingham in the Cotswolds but the Cooks had always been Watlington people at heart.

Being part of the Watlington community was key to Ken’s life and this started when he was just four and growing up in the Bull pub.

His childhood was spent on the hills, scrumping in the summer months, while in winter he would go tobogganing with the boy scouts down the White Mark.

If he wasn’t being one of the boys, he was sweet-talking the local ladies. In the words of his brother Reg: “He had a lot of girlfriends.”

Ken left school at 14 and started work at a Stokenchurch chairmaker’s, cycling there six days a week up and down Watlington Hill.

His career there was shortlived, however, as asking for a pay raise resulted in him being given his cards.

After this foray into carpentry, he started work at the Pressed Steel Company’s plant in Cowley, making ammunition boxes.

His first port of call was the RAF recruitment office as every young man at the time wanted to fly and Ken was no exception.

Unfortunately, his dreams of being a dashing fighter ace were shortlived as he was told they were not recruiting at that particular time which, considering his fear of heights, was probably a good thing.

His next port of call was just around the corner at the Royal Navy office. They were recruiting and, with a few white lies, Ken managed to get himself signed up underage. Upon his 18th birthday, Ken was assigned to coastal forces. Managing to dodge D-Day, he spent much of his service in the Mediterranean, being based out of Malta and Egypt.

He was skippered by Scott of the Antarctic’s son Sir Peter Scott, skinny-dipped in front of the queen of Egypt and famously took a  solo circumnavigation around Malta harbour by rowing boat while being pelted with rubbish.

He was involved with the Anzio and Sicily invasions and rescued US sailors whose ship had been torpedoed by German U-boats.

When he returned to civilian life Ken worked in the family businesses, overseeing the running of the watercress beds in High Wycombe, Wheatfield, Ewelme and Watlington.

Unfortunately, the cress beds became unprofitable, so he returned to the Pressed Steel in Cowley, this time pressing Rover car parts.

He became a shop steward at the plant but apparently was the only one who was a Conservative and was one of the few who worked rather than went on strike during the Seventies.

Ken met his first wife Gisela in Germany after the war and they had two sons, Peter and Michael.

The marriage didn’t work out and, with sole custody of the boys, he looked after them with help from his mother.

He met Greta, his second wife, at a New Year’s Eve work dance. They clicked and were married in 1960. They had a long and happy marriage and were together for more than 50 years.

Ken officially retired from the Rover plant in 1987 after 37 years but he was not one to sit around and read the paper all day.

Instead he started a new career working as gardener and handyman for Peter and Katherine Kausland.

This lasted for 25 years and the couple became a second family to Ken and he a second father to them.

Ken was deeply involved with the Royal British Legion and was asked by General Sir John Mogg to help set up the Watlington branch in 1976. He was chairman of the branch for nearly seven years and ran the welfare branch for 20 years.

He continued to collect for the Poppy Appeal in the high street each year until a few years ago.

After many years of contributing to the cause, Ken was awarded the national certificate of appreciation, national life membership and the gold badge for his hard work and dedication.

In 1974, Ken became a grandfather to Neil and over the next 10 years saw three more grandchildren, Heidi, Alex and Helena.

He enjoyed spending time with them very much and it would make his day.

Ken’s Legion connection allowed him to take his grandson Neil to several amazing events, including Trooping the Colour and the Festival of Remembrance at the Royal Albert Hall.

In the last 10 years Ken became a great grandfather to Hattie, Emelia, Jacob and Harry.

In recent years the loss of his sight caused him sadness but he never complained and would be the first to say that the silver lining was that it brought the charity Blind Veterans UK into his life.

It was even possible for him to take holidays to the blind veterans centre in Ovingdean, near Brighton, and to the battlefields and war graves of northern France.

But perhaps his proudest time was being able to take part in the Remembrance Day parade at the Cenotaph in London for the last two years.

Ken was proud to have served and made friends that lasted his lifetime but also enjoyed making new, younger friends at Ovingdean.

He will be missed but his family are pleased that he was part of their lives and learned so much from him. As a member of one of our greatest generations, Ken’s passing is even more poignant but what he had to go through to allow us to live in the world today will never be forgotten.