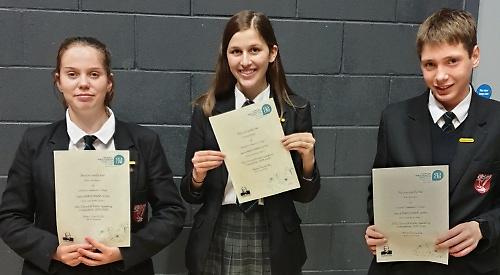 PUPILS from Icknield Community College in Watlington took part in a public speaking competition for the first time.

Sian Carrington, Saoirse Brady and Alex Wooster, who are in year 10, represented the school in an area heat of the English Speaking Union contest held at Oxford Coroner’s Court.

The team, which had qualified from the first round held in the autumn, competed against five other schools.

Each team presented from the judge’s bench while the main speaker used the witness box.

Sian was the chair, Saoirse the questioner and Alex the main speaker. His topic was “We lack confidence” and his performance earned him the best speaker award.

Teacher Jacqui O’Reilly said: “Alex was self-assured, clear, humorous and informative, qualities that the lead judge picked out and commended.

“Our team overall did not go through to the district final but to win best speaker in the first year of Icknield’s participation in this prestigious competition is a fantastic result.

“It is a challenging and difficult task they have to complete.

“Many congratulations to all three team members and an especially big cheer for Alex. Roll on next year.”