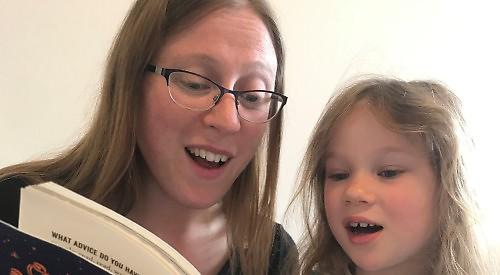 HUNDREDS of people are tuning in to Watlington library’s virtual storytime and “creative club” sessions.

The library’s family activities group launched the sessions on Facebook after the building was forced to close because of the coronavirus pandemic.

Rachel Huckvale, a member of the group, reads stories at 11am every Saturday from her living room with her daughter Caroline, six.

The session is aimed at under-fives and has 15 to 20 minutes of singing, rhymes and storytelling.

Jen Skene, another member, runs the creative club at 2pm every Wednesday for children aged five to 11, also on Facebook.

This includes creative writing, drawing and crafts. Once the sessions have been recorded they can be viewed again. The normal storytime sessions are held every other Saturday and are attended by about 15 children.

“Although there’s an awful lot of content online which is being created by all kinds of people, such as authors, we thought it was quite important to create something that is community-centred and produced by people the children already know and are familiar with.”

In one week Mrs Huckvale read a poem that her mother-in-law Jo Huckvale wrote for her daughter when she was little.

In other weeks she read stories by author Sue Palmer, who visited the library last year, and created a story using a bag of random items from her home.

In the week that singer and guitarist Charlotte Pinney performed, more than 1,200 people viewed it. The first four creative clubs had more than 1,000 views between them.

Mrs Huckvale, who also has a one-year-daughter April, said: “I do the reading and Caroline helps me out and she always sits alongside me. The first one was very nerve-racking.

“It’s very difficult because you don’t get any feedback and you can’t see how it looks or how it sounds. I’m getting less nervous as the weeks go on.

“We’ve really been blown away by the number of people watching. We knew there was an appetite for it but it has grown and is being shared much wider than just Watlington.

“The library is such a central part of the community. The whole point of storytime is to get people to know the library is there, to get them reading and taking books out.

“Often parents of really young children don’t realise how much there is.”