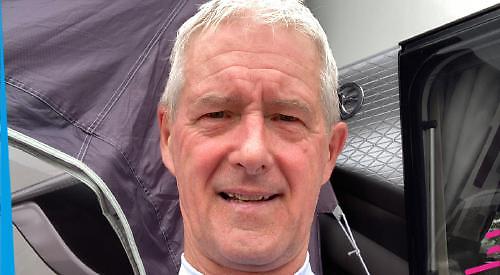 A MAN from Watlington raised more than £1,400 for a charity with a sponsored bicycle ride.

David Walters, 65, took part in My Prudential RideLondon in which people around the country were invited to cycle 46 miles because the event itself had been cancelled due to the coronavirus pandemic.

He was supporting Wyfold Riding for the Disabled, where he and his wife Anne have been volunteering for 20 years.

The charity provides horse riding for people with physical or mental disabilities.

Mr Walters, who worked in sales and marketing before retiring, did his ride in the Brecon Beacons in South Wales.

He said: “It was great. I did it in three hours, which I was very pleased with as it was challenging and the mountains can be very unkind.

“I was glad my wife drove me around the course the day before. It was more or less going around a military danger course.

“There was one bit that was just one long road which had absolutely perfect tarmac but a few miles before this I slipped on a cattle grid. I fell off the bike and got my right leg stuck and I could hear a vehicle coming in the distance. It was a young farmer on a quad bike and when he stopped laughing he offered me a lift. However, I managed to get out and carry on but I did bruise my leg.”

Mrs Walters, 65, said she had worried about her husband during the ride.

She explained: “Four years ago he went on a bike ride and I got a call telling me not to worry but he had fallen off. He broke his hip and had to have two screws put in.”

Mrs Walters, who used to ride horses, added: “We feel absolutely passionate about the charity as the kids and others going for a horse ride are really benefiting.

“They are being exercised in a way they might not be able to in a normal PE lesson.

“Some people don’t talk and then they go for a ride and speak for the very first time.” Mr Walters said: “The charity relies on volunteers and donations as it is self-supporting. We have to raise the money ourselves and need £40,000 a year to operate.”

In seven years, the Prudential RideLondon festival of cycling has helped raise £77 million for thousands of charities.