Apple pressing event is at the core of nature festival 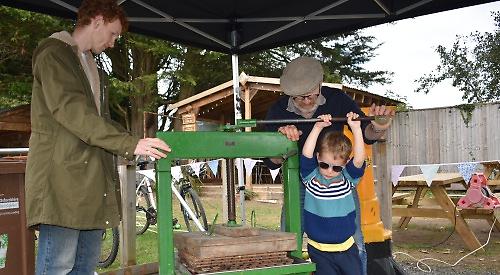 WATLINGTON Nature Festival got under way with an apple pressing event.

The Big Squeeze allowed groups of up to five people to scratter and press their own apples in the car park of The Spire and Spoke pub and then bottle the juice to take home.

About 40 people were helped by Sophie Nelson, who came up with the idea for the festival, and Alex Tait, the custodian of the town’s community press, who runs the Orange Bakery with his teenage daughter Kitty.

Participants had to book a slot, bring their own pre-washed apples and bottles. The equipment was sanitised after each pressing and participants observed social distancing guidelines.

Mrs Nelson, of the Watlington Climate Action Group, said: “It’s a way to involve the community and for people to do something rather than just observe. That’s the whole idea behind the festival. The idea of apple pressing came to me because we have a community press and people love it. We have done it in previous years and it’s a big marker of autumn.

“The beauty is there’s an educational aspect and that’s very important. The earlier that children and young people engage with nature, the better. We were not providing plastic bottles as we have done in previous years to reduce plastic waste.”

Max Briercliffe, three, pressed apples with his mother Sophie, whose parents had brought the fruit  from their garden in Taunton.

Mrs Briercliffe, who lives in Watlington, said: “For Max it’s a fun thing to do on a Sunday and to see where apple juice comes from.”

Mrs Nelson said she was keen to involve young people in the festival.

She explained: “I looked at my own children and thought, ‘They have spent a few months at home on their screens and not going out. The safest thing to do now is outdoor activities and that is in line with what the climate action group is all about.”

A number of other festival events will be held in association with the Chilterns Walking Festival.

They will include a Viking Silver & Chilterns Chalk event on October 17 at 1.30pm and 2.30pm. Participants will spend time in the Watlington Chalk Pits nature reserve, where they will be able to learn more about the Watlington Hoard, a £1.35million treasure trove of Viking-era ingots, bracelets and coins found in a field near the town in October 2015.

Walks will be held on October 22 with Steven Gozdz, of GG Wildlife Walks, and on October 28 with Tim Wyndham-Smith, of the Adventure Revolution.