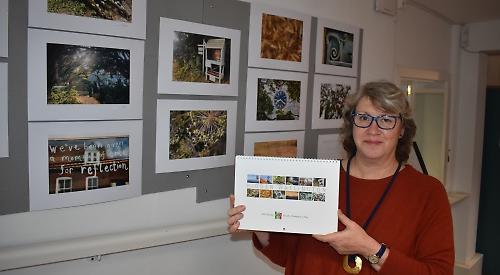 SEVENTY-FIVE photographs were entered into a competition for a new calendar featuring scenes of Watlington.

The contest was organised by the Friends of Watlington Library and the 12 best images were selected for the Hidden Watlington calendar, which is now on sale at the library in High Street.

The pictures were judged by award-winning photographer Ruth Morris, an associate of the Royal Photographic Society, and there were six runners-up.

The photos feature landscapes, architecture and various features around the town. Dr Anna Tilley, who chairs the Friends, said: “I’m delighted with the great response — we had more entries this year so hopefully it was a good focus for the town. People have interpreted Hidden Watlington in so many different ways.”

She said the aim of the competition was to reveal the beauty of Watlington and the final collection of images was “eclectic”.

“Our creative Watlington photographers once again rose to the challenge,” said Dr Tilley.

“Whether a hidden architectural detail, place, view or surprising hidden angle showcasing a secret gem, these photographs really encapsulate both lasting and transient details of our lovely town. All of this went on when the library was closed.”

The money raised from sales of the calendar will go towards supporting the library.

Their pictures are on display in the library along with the pictures taken by the runners-up, with laminated versions in the windows. Three of the shots are also available to buy as notecards. One of the youngest runners-up was Watlington Primary School pupil Katie Ingram.

Each month in the calendar has been sponsored by a business.

The calendar, which costs £8, was put together by graphic designer Ross Spiers.

It is now on sale at the library, the Granary Deli and the Italian Handbag Company in High Street and Watlington Fine Wines at Watcombe Manor Farm.

• Since the library re-opened on September 29 it has been visited by more than 500 people.