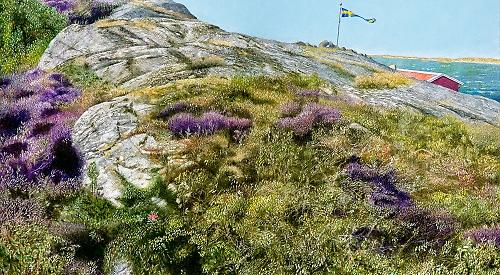 JAMES KELSO is a self-taught artist who works with acrylics, oils, watercolour and graphite on board and paper. He has exhibited in galleries throughout Britain and America. He lives in Watlington.

IN 2019, my Swedish wife Marianne and I were on holiday in Stockevik on the west coast of Sweden.

We were staying at her sister’s summer house as we’d often done.

One day, we wondered how many more vacations we’d have there. From this came the idea of making a gift for our hosts, a thank-you, a memento. We thought a painting would suit. I did some sketches, took photos and that was that, no hurry, no pressure.

Back in Watlington I began work. The year turned. Tragically, in February Marianne was diagnosed terminally ill. She passed away in June. She was an exceptional person, truly exceptional. And exceptionally observant. She knew I liked to read “self-improvement” books. One day she said: “Well, obviously they don’t work.”

For 55 years I was cocooned in a gastro universe of Anglo Skandi civilisation and culture, with her the singularity at its core. A transparent, observable, expanding world filled with friendship, kindness, compassion, goodwill, wisdom, humour, calm, comfort, competence, companionship, courtesy and love, abundant love.

At the still point of this turning world she stood, drenchingly beautiful, becomingly modest, a radiant supernova, an event without horizon, light energy itself, unfathomable, full of laughter, with the bluest of knowing blue eyes, a smile that ignited candles and an urbane wit that could rivet girders. She once said: “By the way, in case you’re searching for it, I’ve thrown out your Thesaurus.”