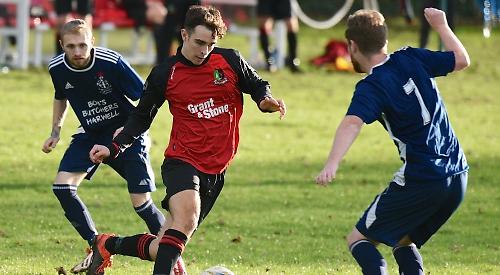 SUBSTITUTE Tom Bowden netted the only goal of the game as Watlington Town Reserves notched up another win in Division 2 of the North Berks League on Saturday.

After a month away from action due to the second national coronavirus lockdown, Town faced a Hagbourne side struggling for form and points so far this season.

Watlington were on the front foot straight from kick-off. A free-kick from deep was lofted into the box and the ball was was brought down by Dan Osbourne, who was then pushed in the back by a Hagbourne defender for a penalty in the first minute.

Kyle Carrigan stepped up but his kick was then saved by the Hagbourne keeper, and Jaiden Hawkins blazed the rebound over the bar from 12 yards out.

This stroke of good fortune galvanised Hagbourne and their players enjoyed good spells of possession in the opening 20 minutes and forced Town goalkeeper Richard Smale to make a smart stop with his legs to deny the Hagbourne striker from inside the box.

Town began to find their rhythm as the half went on but struggled to create real chances, the best of which coming from Dan Binaccioni’s
30-yard drive, which was tipped wide of the post, and Steve Outten’s header, which was caught by the Hagbourne goalkeeper.

The change in shape seemed to work and after the break, Town were very much the team on top. Taylor Priddle had an effort from inside the box beaten away by the goalkeeper, and Bowden had a 20-yard strike saved as well.

Dan Osbourne then hit the underside of the bar, with the referee unable to tell if the ball crossed the line.

Town did eventually go in front when Bowden’s head met a Carrigan corner and over the goal line.

Afterwards, the game lost its spark with Hagbourne trying to push forward but without success.

Milton have played three fewer games than Town but they kept the pressure on with a 4-1 win at home to Lambourn Sports Reserves to maintain their 100 per cent league win record.