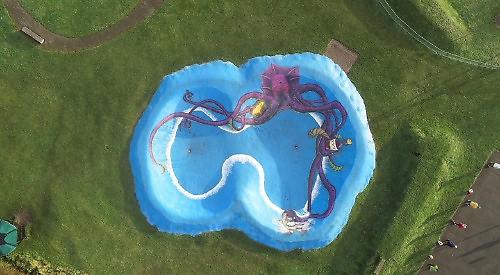 A HUGE mural depicting a mythical sea beast has been unveiled at Watlington skate bowl.

The kraken was painted by artist Rory Gallagher and includes a galleon, a treasure chest and a bottle of rum in a nod to the brand of the drink named after the squid-like sea monster.

Skateboarder Martin “Dixie” Dix, from Oxford, and Dean Bullion, from Reading, spent a week in the summer repairing the bowl and applying a base coat of paint ready for the artist to add his design.

The pair, who run a painting, decorating and refurbishment business and a specialist longboard firm, worked for nothing.

The materials and other costs totalling £1,400 were paid for by the parish council.

The 30-year-old skate bowl, which is adjacent to Watlington recreation ground, off Shirburn Road, has an undulating design that mimicks a wave.

Mr Dix, who is also a surfer, said the idea of the kraken was thought up at a “Bowlstice” event in the summer of 2018.

He got in touch with Mr Gallagher, from Chertsey, through a mutual friend.

The artist was supposed to begin work in the spring but this was delayed until late autumn by the coronavirus pandemic and bad weather.

Mr Gallagher took five days to complete the mural. The tentacles of the kraken mark out the best lines for skaters to ride around the bowl and parts of them glow in the dark. The painting has been treated with a varnish to give it UV protection so that it doesn’t fade.

Mr Gallagher said: “Dixie knew exactly what he wanted straight away. I thought it sounded cool.

“He sent me an aerial photo of the bowl and I planned its outline on A3 paper and then sketched out where the kraken should be.

“All the tentacles with the suckers I just made up as I went long. It was a really fun project to plan and I’m really pleased with it.” Residents of nearby Love Lane provided him with coffee, sandwiches and cake while he worked.

Mr Dix said: “I’m utterly stoked with it and the kids just love it because it’s their facility, we’re just caretakers.

“We ride here far too often than we really should but we have agreed with the parish council to maintain it and to do any work necessary every three of four years.

“Because it’s 30 years old it can succumb to damage every now and again and we repair it and put a fresh coat of paint on it every few years. The last time we did it was in 2016.

“This mural will last a very long time.”

He said people had come from as far as Gloucestershire to see the
artwork.

Nicky Smallbone, who chairs the council’s finance and pavilion and sports field committees, said the bowl needed repairing and Mr Dix approached her with the idea of the mural.

“Why would we not do it?” she said. “I think it’s great value and the kids love it. It is a great asset to the community.”

It is hoped that a skateboard club will now be formed.