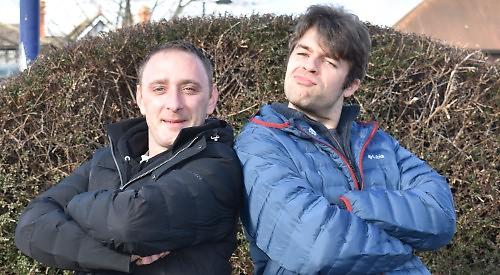 A CARER who launched a nationwide danceathon in aid of mental health has described the reaction from other people as “awesome”.

Dave Coombes, 38, organised Join the Dance, One Love United on Sunday, Valentine’s Day, to cheer people up during the coronavirus lockdown.

He encouraged people to dance for 14 minutes at 2pm in their homes, gardens or in a public park.

Mr Coombes, from Watlington, did the challenge himself with his charge, 31-year-old Dan, who has a brain injury.

They filmed themselves dancing on Marlow Green, and then posted that on the social media channels.

Mr Coombe said: “We had dog walkers stopping and people running across the road to take part with us — at a distance — and our video was watched live by 250 people. Within 24 hours our dance was watched by 8,000 people and membership of our group on Facebook has grown by 1,000 a week since we launched it. The response has been awesome.”

Mr Coombes came up with the idea after Dan started to feel down due to the national lockdown and felt a new routine would help him. Every day the pair would go to a new place to dance and post daily videos to raise the importance of mental health during the covid crisis as well as spreading some cheer.

Mr Coombes said there has been a massive difference in Dan as a result.

“This is probably the happiest I have ever seen him,” he said. “It makes me feel pretty awesome and we want to keep going.”

For more information, visit the Join the Dance, One Love United page on Facebook.