Pubs and cafes happy to welcome back customers 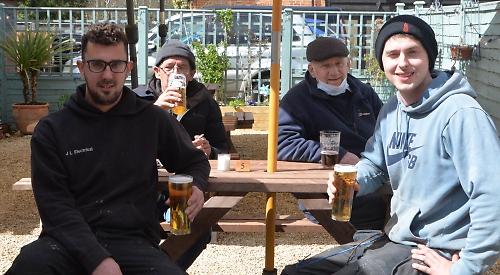 REGULARS returned to a Watlington pub the moment it opened for the first time in months.

The Fat Fox Inn in Shirburn Street was trading again on Monday when non-essential businesses were allowed to re-open with the coronavirus restrictions being further eased. Pubs and cafés are allowed to serve customers outdoors only.

Snow in the morning worried business owners who thought it would affect their trade. However, the sun came out in the afternoon.

The Fat Fox was serving traditional food and drink in a new outdoor space at the back of the property.

Heather Abernetti, who bought the pub with her son Rob Ferri a year ago, said: “It was great to see regulars showing up for a pint as soon as we opened at 12 o’clock.

“I could hardly remember how to pour a pint after three months of being closed.

“We are very excited to be open again as we have done so much renovation.”

Mr Ferri said: “We are trying to go back to some sort of normality. We’ve got 11 or 12 tables outdoors, so the maximum capacity is 30 to 40 people. Foodwise, we’ve gone back to basics, offering fish and chips and burgers, but we are also going to offer afternoon tea, which is something we’ve not tried before.”

The Waterfront Café in Benson has about 70 tables outdoors and a new ice cream bar.

Jenny Price, one of the partners, said: “Everyone is really positive and excited to be able to move around a bit more and do something a bit more normal.

“We’ve got all this outdoor space which we weren’t able to use for such a long time, so it’s almost strange to see people on it again.

“Offering takeaway during lockdown was a leap in the unknown but it worked out well and we received so much support from the community.”

Chris Price, who has been running the café for 32 years, said: “ Customers were dying to be back because we have such a lovely location.

“The chef has been busy making lots of delicious food, so we were really looking forward to it. We don’t take reservations, customers just show up and we accommodate them. We encourage them to order online directly from their tables, so it will be safe for everyone.”

Philip Noble, who owns No 25 Café in High Street, Benson, said: “We have set up five or six tables outside and we are offering a new menu. Coffee shops should be full of people and sounds and noises, so we are really excited. Now we just need a bit of warm weather.”

The café has been open for takeaways during the latest lockdown.

Mr Noble, 40, who set up the café with his wife Stephanie, said: “It has been nice to be there for the people of Benson. For us that was the main reason to carry on. We probably just about broke even but Benson gave us so much support.”

The couple first opened the café in June and Mr Noble said: “We’ve only known covid operations, so it’s quite exciting to think that in the future we won’t have to think about restrictions and covid rules.

“The best thing about it has been the people we’ve met and the lovely things they say about us and about the café. It has become a sort of community hub.”

The Crown Inn in High Street, Benson, will not open until May 17 when hospitality businesses can allow customers indoors again.

Owner Miles Partridge said: “Since we mainly offer food, we decided to wait until we can fully
re-open and no one would be using the outdoor space in this weather anyway.

“We are also building a new outdoor bar and kitchen area which will be open to the public in May.”

The Chequers pub in Watlington is waiting until April 29 to re-open and there will be a quiz night on Saturday, May 1 to raise money for Watlington Methodist Church.

Landlord Andy Stokes, who runs the pub with his wife Louise, said: “We have limited seating in the garden so it wouldn’t have made any sense to open on Monday anyway as it was still quite cold out there.

“We thought, ‘Let’s just get April out of the way and then on May 17, when our customers are allowed indoors again, we can get everyone inside’.”

The couple have decided to move on after more than a decade running the pub but will remain until the end of July.

Mr Stokes said: “It’s a lovely pub and I’m really hoping someone can take it on when we leave.”