Town given ‘plastic-free’ honour after campaign 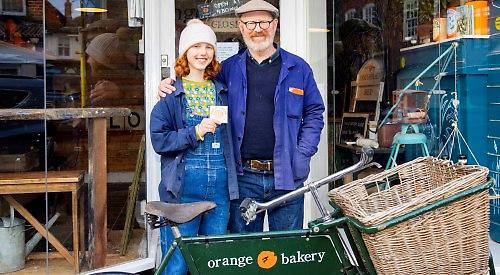 The town was recognised by Surfers Against Sewage, a marine conservation charity and campaign group.

They worked with businesses and organisations to minimise the amount of disposable plastic used in their daily operations.

Councillor Jackson said: “I’m really pleased we got this far and I’m looking forward to getting the rest of the community more involved.

“This is just the start but with this accreditation we can really push to encourage more businesses and organisations to join us.

“We currently have 10 organisations and community groups in Watlington who are our ‘plastic-free allies’ and parish councillors also signed the pledge.

“We need to continue and get everyone involved as we want to make the high street plastic-free and we are not far off.”

Mrs Schafer said: “It’s a fantastic achievement. We are so pleased with the community engagement and the way businesses have responded. Everyone we have asked has been very keen to be involved. All the most visible businesses on our high street are now ‘plastic-free champions’. In order to do that, they had to make at least three changes to their handling of single-use plastic as well as a plan on how to reduce plastic going forward.

“It is really important that we don’t stop now — we need to make sure this issue stays in the public eye.”

The first business to be named a “plastic-free champion” was Calnan Brothers butchers in High Street.

It has also reduced the use of plastic trays with lids which are now only used for ready pre-prepared meals.

Owner Tom Calnan said: “Everyone’s a bit more conscious about single-use packaging and we have taken a couple of small steps to improve ours.

“It’s all recyclable and it keeps the product better because plastic makes meat sweat if it’s kept there a long time so it’s win, win.

“You go into supermarkets and all the packaging is horrific. Think about a supermarket chicken — it’s in a plastic tray with a plastic covering. People will come in here three times a week and will buy what they are going to eat so you’re cutting down on food waste. All our stuff is fresh daily so there’s never any wastage.

“Local shops have more control over their produce compared with supermarkets. The bigger message is ‘shop local’ and without knowing it, you’ll be doing more for the environment.”

The Undercroft, which is run by Angela Clark at the town hall, has reduced its single-use plastic by returning customers’ strawberry punnets to the supplier, changing the string used to tie asparagus and using paper packaging instead of plastic bags.

Other “plastic free champions” include bulk-buy shop So Sustainable, run by Steph Van de Pette, where customers fill up their own containers, the Orange Bakery and chocolate shop Tutu Delicious.

Rachel Yates, of Surfers Against Sewage, said: “It’s great to see the work that Watlington has done to reduce the availability of avoidable plastics, raise awareness and encourage people to refill and reuse.

“We have more than 600 communities across the UK working to reduce single-use plastic and the impact it has on our environment.

“Every step those communities and the individuals in them take is a step towards tackling the problem at source, challenging our throwaway culture and encouraging change.”