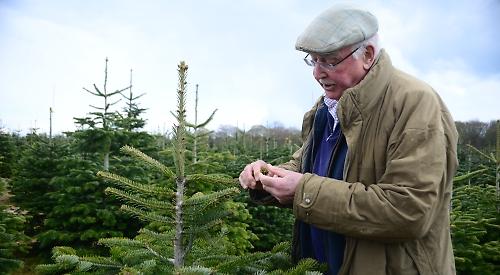 A CHRISTMAS tree farm near Watlington is getting ready for its busiest time of the year by planting 17,500 new saplings.

Andrew Ingram, who runs the Tree Barn in Christmas Common, has been growing trees for 50 years and they sell in their thousands in the run-up to the festive season.

His wife Jane is responsible for their seasonal shop, which stocks all kinds of tree decorations, including baubles, trinkets, garlands and tinsel.

The farm has about 70,000 trees, which have to be shaped twice a year, in spring and autumn.

Mr Ingram, 73, said: “We planted new trees at the beginning of April and each of them is taken care of to make sure it has the perfect shape.

“It takes a long time to get the perfect Christmas trees ready. A lot of work goes into them all year round.

“The perfect Christmas tree has to have a nice triangular shape, a beautiful dark green colour and needs to be quite dense.

“We do a lot of work to make them look exactly how the public expects them to look as a Christmas tree doesn’t grow like that naturally.”

The Tree Barn supplies hotels and offices in Henley and London and colleges at the University of Oxford.

It also provides the Nordmann fir that is erected in Henley market place each year and supplied the 10 Downing Street Christmas tree in 2011, 2013 and 2015.

Mr Ingram began planting Christmas trees in 1971. He said: “This used to be a conventional farm but milk demand dropped and I had to sell the cows in 1980.

“I had to find something to replace the cattle and I started by planting about 3,000 trees per year.

“I took a gamble and was very lucky. I found that we have the ideal soil and that we don’t get heavy frost which could damage them.

“We had an immediate market and after a while I changed variety. Initially we grew the Norway spruce, the traditional English Christmas tree, but this variety drops its needles really quickly, so we switched to the Nordmann fir, which is now the most popular.”

The remaining 10 per cent are equal numbers of lodge pole pines and Serbian spruces. Mr Ingram uses a satellite-guided tractor to ensure the trees are planted in perfect straight lines exactly 1.2m apart.

He said: “Now we just need some rain.”

A team of three people takes care of the trees during the spring and the Tree Barn employs eight more people from the beginning of October up until Christmas.

Mrs Ingram, 61, has been managing the shop for two decades.

She said: “With Andrew selling the trees, it made sense for me to focus on the decorations and more and more people were asking for it.

“It seems to have grown without us realising, I thought I could do it part-time but it took over my life.”

She usually buys new stock at trade fairs but this year has been buying it all online as the fairs were cancelled because of the coronavirus pandemic.

Mrs Ingram said: “Usually, I’d have gone to my first fair in January and then to Frankfurt and three or four days in Birmingham but obviously I haven’t been able to do that.

“I’ve been doing this for 20 years, so I know what to look for, but it’s hard to choose decorations when you’re not able to physically see them.

“I have the luxury of time, which regular garden centres don’t really have, and can just concentrate on getting us ready for Christmas.”

The new stock will start to arrive in September. Mrs Ingram will then arrange the shop displays in October in readiness for opening in November.

She said: “We’re only open for two months a year, so it’s quite intense and we really want to get it right.

“It’s lovely to see people coming back every year and to see that a trip to the Tree Barn has become part of their family tradition.”