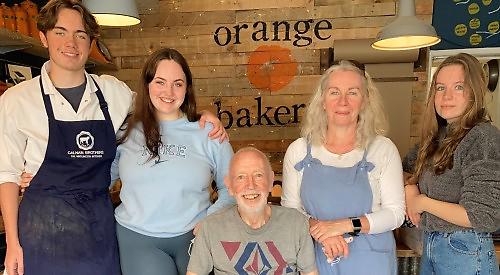 A WOMAN from Watlington is running 10km for charity after her father was diagnosed with an incurable disease.

Rosie Wotherspoon, 21, is raising money for the Motor Neurone Disease Association after her father Malcom was diagnosed with it in February.

She said: “I knew something was wrong but I wasn’t expecting this. It was a big shock for the whole family and our friends as well, after the year everyone has had — it was the cherry on top of a very awful cake.

“The idea that in 18 months, and for some people even earlier than that, you can go from being able to do everything by yourself to being in a wheelchair is devastating. I’m watching it happen and it’s cruel, it is awful to watch.

“There is nothing that can be done about it, you can manage the symptoms but there’s no cure so I decided that the best way to help was to do something locally and lots of people have donated.”

Miss Wotherspoon has already raised more than £1,780 and wants to do more to increase awareness of the disease.

“We want to do as much as we can,” she said. “When the diagnosis came I knew what it was because I’m a healthcare assistant but most people don’t know what Motor Neurone Disease is.

“Everything in your body wastes away — it affects your ability to speak, breathe, eat and walk. Some people will also end up not being able to swallow and most patients end up on ventilators.

“It’s not the most common disease and there is no cure, we still don’t know why it happens and what the cause of it is.”

Her twin siblings, Elizabeth and Finlay, 17, will also be running in September in a group of about 10 people. She has not yet decided on an exact date or route but they have been training running 5km three or four times a week to prepare for it.

Miss Wotherspoon said: “We are trying to build up stamina by going further and faster every time. The aim is to reach a point where I can run 10K without stopping. We are running intervals and I’m also doing a lot of hill running.

“I’m not a natural runner but I thought it would be good to set myself a challenge. Running is a really good mental release. Through all this we have all taken a big hit and I thought I could do something positive for me and for the charity, to be in a much more positive mindset and I always feel good after training.

“I sometimes run with my siblings but they are both footballers so it’s quite hard for me to keep up with them. My boyfriend is also running with me and a group of friends and family will take on the challenge on the day as well.

“We still have to figure out the course but we know it will finish at the recreation ground so that my dad can be there to see us all finish.”

Before the first national coronavirus lockdown in March last year, her parents used to go to the Granary Café in High Street every day.

Liz Winton, who runs the café, decided to help Miss Wotherspoon with her challenge and is training with her, as well as creating the 10km course, which will start and finish at the recreation ground in Love Lane.

The café will also sell cakes to raise money for the charity.

Ms Winton said: “Malcom is one of our favourite customers, he and his wife Caroline have been so supportive of the café and it’s always good fun when they come in.

“I knew Rosie wanted to run a 10K and I’m an avid runner so I offered my help and the training is going very well. I imagine it will be a very emotional time for her on the day.”

Miss Wotherspoon added: “My parents spent a lot of time with Liz at the café and she feels really close to them. My dad is such a lovely person, very jokey and well-liked — even now, he still jokes.”

Meanwhile, The Orange Bakery in High Street is selling buns to help with the fundraiser.

Alex Tait, who runs the bakery with his daughter Kitty, decided to get involved after learning about Mr Wotherspoon’s diagnosis.

Miss Wotherspoon said: “Kitty and Al are amazing, we have known them for a long time and we are overwhelmed with their support. I went to the bakery to put up a poster about the fundraiser and it was Kitty’s idea to bake the buns, it was lovely.”

In September, Miss Wotherspoon will go on to study adult nursing at the University of Southampton.

She said: “I think my dad’s diagnosis solidified something that was already there, I wanted to be able to help lots of people and look after them. It showed me that was the right path to do down.”