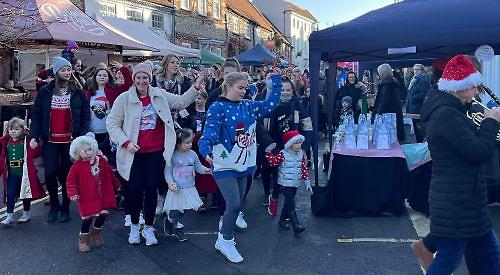 HUNDREDS of people attended a Christmas market in Watlington.

There were 45 stalls in High Street selling arts and crafts, street food and produce.

Saturday’s event began with a traditional parade led by Father Christmas, who had arrived at the town hall in a fire engine.

He was accompanied by town crier Rae Young as he made his way to his grotto, which was located in a resident’s garage in High Street.

There were performances by the Watlington Concert Band, Performanze dance school and local choirs, including Sing Yourself Happy, which was started by resident Susan Ingram.

Jan Willis, who organised the event with five other volunteers for the Watlington Business Association, said: “The weather was very kind to us and we had a great turnout.

“I think people really missed it last year when it didn’t happen and were looking forward to it. The high street was packed and people seemed to be really enjoying it. We were really pleased.

“Santa arrived right on time and he led the parade with the Watlington Band, which proved to be really popular.”

High Street was filled with food and drink stalls, including a barbecue run by Calnan Brothers butchers, baked goods from the Orange Bakery and hot chocolate from Tutu Delicious.

There were craft stalls inside the Watlington Club, where people had to wear face masks.

Ms Willis, who runs a marketing business and has been helping with the organisation of the event for the past five years, said: “I joined the association when I moved to the town in 2017 as I wanted to get to know the community.

“We are already looking for new people to join us next year — there’s new folk moving to Watlington all the time and taking part in the market is a great way to meet the community and businesses.”

The grotto was organised by the Watlington Primary School parent teacher association, which also ran a stall with games and children’s entertainment that raised more than £300.

Claire Hodges, who chairs the association, said: “The grotto was really busy, especially at the start of the day and Santa said he was really happy to see the children again after a year off.

“We weren’t sure how popular it was going to be so it was great to raise that amount.”

About 12 artists from Watlington were selling their works inside the Watlington Club.

Jaine McCormack, who organises the town’s Artweeks festival, said: “It was lovely and a real community celebration after a year off. Lots of people turned up and the community spirit felt really positive.

“Usually we have an arts Christmas market which is a separate event but this year we thought it was important to support the main event.”

The town’s climate action and environment groups had a stall and raised £120, which will go towards improving the town’s green spaces and supporting wildlife.

Sophie Nelson, a member of the action group, said: “We had a lot more people than we had expected.

“It felt like a great celebration of our town and the work we are doing for the environment and biodiversity — there was definitely a positive atmosphere.”

A raffle with 42 prizes donated by local businesses raised more than £3,000, which will go towards the town’s Christmas decorations with donations to charities with youth programmes.