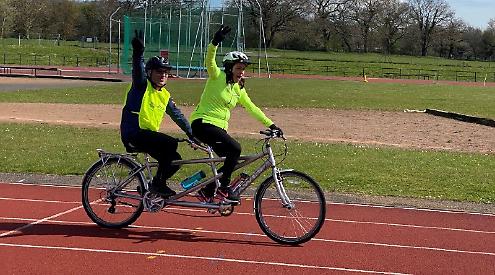 A COUPLE cycled 22km to raise money for a charity that helps people with visual impairment.

Daniel and Marlene Goncalves Fernandes, of Barnacre, Watlington, took part in the Oxfordshire Association for the Blind’s tandem challenge at the Horspath athletics track in Oxford on Friday.

They and two other couples completed the distance to represent the 22,000 people in the county with a visual impairment and raise funds so the association can continue to provide free equipment, advice, counselling and training.

Mr Fernandes, 40, has had a visual impairment since he was three years old and had surgery for the first time when he was 10.

He started cycling again when the association gave him a tandem bicycle.

He said: “We really enjoyed it and it was a real celebration. On Friday night we definitely started to feel it in our legs but it was worth it.

“There were so many people cheering us on from the sidelines, which kept us motivated. I’m glad there were volunteers counting the laps because I definitely lost count a couple of times.

“My two daughters were really proud and my wife enjoyed it — it was really great fun. I would definitely like to do it again next year to raise even more money for this great charity.

“Thank you to all the people who donated after seeing the article in the Henley Standard, it really made all the difference.”

Molly Davies, the association’s communications officer, said: “We want to say huge congratulations to our amazing cyclists for completing their challenge and for raising almost £3,000.

“A big thank-you to all their friends, family and the community for donating. These funds are vital in providing support to visually impaired adults and children in Oxfordshire.”