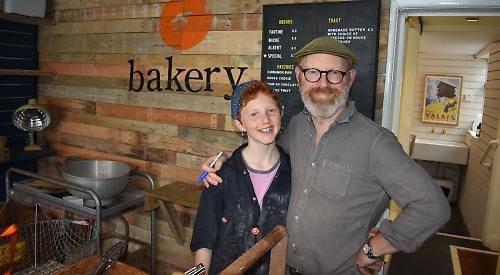 The 17-year-old and her father Alex run the Orange Bakery in Watlington.

Kitty left school in 2018, when she was just 14, after being diagnosed with depression.

She started baking after watching her dad make a loaf of bread in their kitchen at home and soon became obsessed. She even took to sleeping in the kitchen.

The pair began selling loaves to neighbours and found the demand just kept growing. Soon they were running a subscription service, which turned into a pop-up ona Saturday and eventually they opened a shop on High Street.

On Sunday, father and daughter were featured in the Observer Food Monthly magazine, where they spoke about their beginnings in baking, the Watlington community and their new cookbook, Breadsong.

TV chef Nigel Slater said it was “the most heartwarming story” but also “far more than the story of an obsession with bread but, more crucially, one of recovery and healing”.

Breadsong, which is named after the crackle and hiss of freshly baked bread, was released yesterday.

It features a selection of the Taits’ recipes, such as their “miracle overnight white loaf” and “next level Chelsea buns”.

The pair are holding a book signing at the bakery today (Friday) from 9.30am to 11.30am with free cinnamon buns on offer.