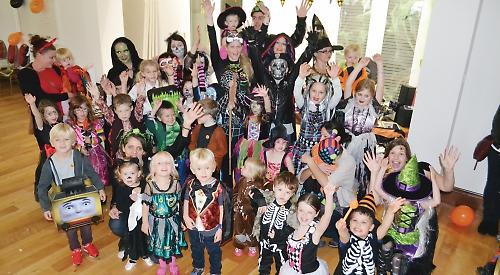 CHILDREN dressed as witches, pumpkins, ghosts and Dracula at a Halloween party at Watlington Pre-School.

About 80 youngsters took part in the fun and games at the Watlington Club on Sunday.

There was a doughnut bobbing, a fancy dress competition and face- painting and children could be “mummified” in toilet paper. There were lots of decorated cupcakes and biscuits as well as sweets to eat.

Pre-school manager Sue Roose said: “All the parents made a huge effort dressing up their children in suitable costumes. The children had a great time — lots of sweets were consumed so they were all quite high by the time we finished!” The party raised several hundred pounds for the pre-school, which is based at the Methodist Chapel school rooms.

Mrs Roose said: “We sold about £180 worth of tickets and took about £300 on the cakes and face-painting.

“We’re reliant on the goodwill of the local community and our wonderful fund-raising team. It was an awful lot of work for everybody involved but it helps us to survive.”

She thanked the pre-school’s fund-raising committee of Annie Posnett, Kate Quarterman and Lucy Forbes for organising the party as well as the parents and friends who baked cakes.