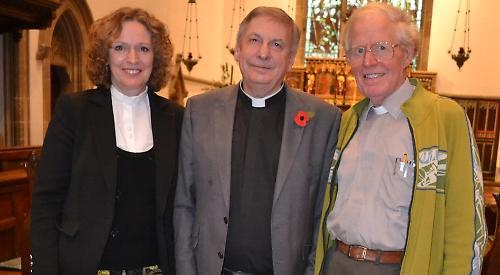 THE rector of Watlington has retired after almost three decades.

Rev Christopher Evans, 65, has served the Watlington, Pyrton and Shirburn parishes since 1987 and also had responsibility for Swyncombe and Britwell Salome for the last 19 years.

He and his wife Jane, who have been married for 35 years and have six children and four grandchildren, are moving to Wallingford.

About 100 people attended a farewell celebration at St Leonard’s Church in Watlington on Saturday where he was presented with a cheque for £6,000 raised with a collection, a painting of St Botolph’s Church in Swyncombe from Watlington Methodist Church and photobooks from his parishes.

Rev Evans served as a rector in Llangeinor, Bridgend, before coming to Watlington with his wife, who worked at the town’s primary school and then became an early years advisory teacher with Oxfordshire County Council.

Rev Evans told Saturday’s gathering that he first heard about the job in a surprise 8am phone call from a woman in the parish asking him to apply.

He said: “I thought it extraordinary somebody ringing up and asking me to be vicar in a parish in a foreign country called England!”

He asked the then Bishop of Dorchester if he and his wife could look around the parish but was told that two people from the Diocese of Oxford were being considered for the position.

Months later, the Bishop wrote to him, saying one of the candidates didn’t want to move and the other had been turned down by the parish, so was he still interested.

Rev Evans said he and his wife agreed to visit the parish but were not impressed by all they saw.

“Nothing appealed to us about the rectory,” he said. “It was painted in sludge green and petrol blue and there was a rug in the dining room that was alive!”

Despite this, he accepted the job.

Rev Evans said: “As we were talking to one another, something just said, ‘this is where we’re called to be’. Then the love affair started.

“We were so glad we heard that calling and came here. We fell in love with Watlington and Pyrton and Shirburn. It has been a great privilege to have been the rector of the benefice of Icknield. It has been a wonderful journey.

“We have been really, really happy and privileged to have enjoyed your friendship and your support.

“It has been such a wonderful experience being part of such an amazing community and that makes it even harder saying goodbye to you.

“Yes, this is a time of goodbyes, but it’s also a time of a new start for all of you, for Jane and myself, and I have really got high hopes for the parish in the years to come.”

Associate priest Angie Paterson told Rev Evans: “We have all got special memories of you and Jane. It has been wonderful to work with you as a colleague — I will miss you. We wish you God speed and God’s blessing.”

The couple were given three cheers.

Rev Evans told the Henley Standard: “I was overawed by the size of the collection — I was completely staggered.”

He said he hadn’t made any major decisions about the future, adding: “Jane and I have been involved in an international ecumenical movement since the Seventies so I’m hoping to spend more time helping there.”

Rev Evans’s time in Britwell was recognised at an annual harvest supper in the village hall.

It kicked off with an appreciation of his Welsh roots. The parish’s good wishes were read out in Welsh and then translated into English.

This was followed by a rendition of Men of Harlech with new lyrics of which Rev Evans was given a framed copy as a memento.

He was also awarded the freedom of the village for services to the parish and the key to the village vaults and presented with a book of photos from events over the years which was compiled by Julia Mearns and Sue Granger.