Cake sale is a sell out 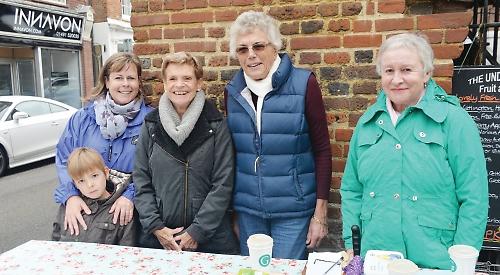 CAKES sold out in 90 minutes at a fund-raising sale for this year’s Christmas tree festival in Watlington. Almost £220 was raised by the sale by outside the town hall organised by the Friends of St Leonard’s Church.

The money will go towards the purchase of the trees for the festival, which will be held in the church, beginning on December 10 with a grand opening by Father Christmas and running until December 21 from 2pm to 5pm daily. Anne Webb, a member of the festival’s organising committee, said she was amazed at the response to the sale, adding: “We also had some jams and chutneys and we sold the whole lot. The people who make the cakes are very generous because they give them to us to sell and people snap them up very quickly.”

The theme of this year’s festival, the eighth, is “let there be music” and will feature more than 30 trees decorated by community groups and other organisations as well as families. Mrs Webb added: “We weren’t going to do it this year because we thought maybe people were getting fed up with it but everybody was absolutely horrified. All the trees are decorated so well and people put a lot of effort into it.” Pictured, left to right, are Karen Byer with her son Will, eight, Janet Vaughan, Anne Webb and Pat Fewell