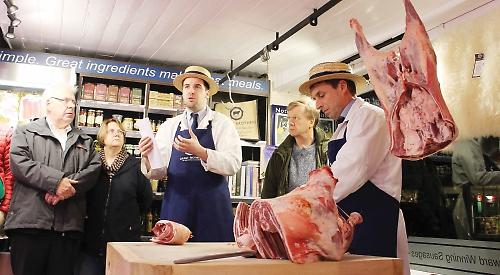 A BUTCHER showed customers how to prepare lamb this Christmas.

He showed them where the different cuts are located, how to make them and how to cook the meat.

Mr Calnan said: “We showed everyone how to cut up the lamb and suggested cuts that people might not have tried.

“We showed them the whole package — cutting it down, explaining it, trying it and explaining the cooking method.

“We try to source everything as locally as possible but ultimately it comes down to quality and consistency.”

Guests paid £30 each for the demonstration, which included Prosecco, a lamb tasting menu meal at the Fat Fox Inn, which Calnan Bros supplies, a cheese tasting talk by Robin Holmes-Smith from the nearby Granary deli and tips from the chef at the Fat Fox.

Mr Calnan said: “They absolutely loved it. A lot of people were disappointed that they couldn’t get in as it’s very popular.

“Everyone wanted lamb and we’ve had beef and pork before so it was the natural choice. We’ll have to think about what to do next year!”