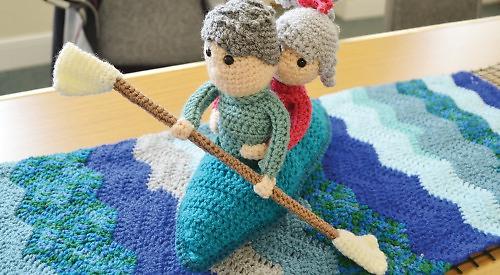 WHITCHURCH Bridge is to be covered in more than 100 works of homemade art.

Scores of residents have contributed to the “yarn bombing” installation, which will run the entire length of the pavement on the western side of the toll bridge from April 29 to May 14.

A series of knitted panels featuring characters and scenes inspired by the Thames Path will run along the top of the girder while panels featuring paintings, drawings and needlecraft will be attached to the sides.

The display will also showcase some more unusual techniques, such as pictures made from scraps of shredded plastic bags.

It has been organised by Gill Williamson, of Eastfield Lane, who set up Whitchurch’s weekly fund-raising art café in 2015, and Alison Livesey, of Swanston Field, who runs a crochet business.

They have created the pieces alongside a team of volunteers who have attended regular “knit and stitch” sessions at the Old Stables off High Street, which will continue after the display is taken down.

Pupils from Whitchurch Primary School have also taken part as have Whitchurch and Pangbourne’s twinning and history societies and a number of retired servicemen from the Royal Hospital Chelsea.

A knitted figure called Sam Mouse will be hidden in shops in Whitchurch and Pangbourne and children will be challenged to record as many sightings as possible.

The highest scorers will be entered in a prize draw held on the exhibition’s final day.

There will be collection boxes at the bridge toll booth and the individual artworks will be auctioned over the summer.

The villagers’ contributions include animals rowing and swimming in the Thames, drawings and paintings of scenes from Whitchurch and images inspired by London and the Reading Festival.

Other subjects include Mr Toad from Kenneth Grahame’s The Wind in the Willows, who was inspired by former Whitchurch resident Sir Charles Rose, the village allotments, scarecrows, fishermen and flora and fauna of the Thames Valley.

Mrs Williamson said: “We’ve had a great response — people’s generosity, energy and creativity has been fantastic and the bridge is going to be covered in all sorts of lovely colourful things.

“Our sessions have been very lively with lots of interesting ideas going around and people swapping suggestions with each other.

“I’ve had up to 30 people attending at once and almost 100 people have contributed in total.

“We’re very excited about the launch and actually pretty relaxed as we know it’s going to work really well. I hope it will get a real ‘wow’ from people and give them something to smile about as they drive or walk past.

“We’ve got people with so many different skills taking part and there’s a real variety of scenes, from the Thames Barrier and the London skyline at night to people feeding ducks in Whitchurch.

“It’s about whatever the Thames Path means to different people.”

Mrs Livesey, who joined the project a few weeks after it was launched in October, said: “This is such a brilliant idea. I had to think about it when I was invited to join because it’s a big bridge and it seemed quite an ambitious task.

“However, I soon realised it was achievable. It has given me the opportunity to just go wild with crochet, which is what I absolutely love to do.

“I’ve also met a lot of like-minded people, so there’s a strong social element as well. It has really brought the community together and I’m sure a lot of new friendships have been made.

“It’s great that so many different crafts are involved. Everyone has their own particular strengths and people have had the chance to focus on what they’re good at, so it should look wonderful when it’s finished.

“We’re all doing completely different things but we can bounce ideas off one another and really get creative.

“I hope people will be delighted and inspired to have a go at doing something similar. I suppose I just want people to get a bit of pleasure from it.”

The opening ceremony will take place at 12.30pm on April 29. Participants will assemble at the Boathouse Surgery in Pangbourne from noon before marching to the bridge.