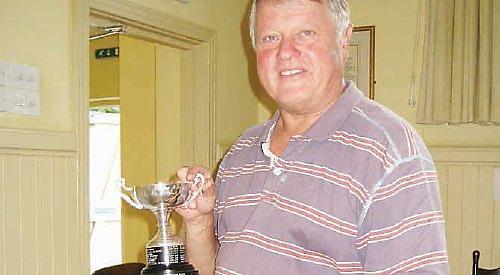 JOHN COUPLAND won three of the top trophies at this year’s Goring Heath and Whitchurch autumn show for the second year running.

He was also awarded the Douglas Allardyce Memorial Rose Bowl for the most outstanding exhibit in vegetables, fruit and flowers with a basket of produce grown at his allotment in Whitchurch.

Liz Gibson, 65, also from Whitchurch Hill, won three trophies for most points in the art, handicraft and arts & crafts sections and shared a fourth one for flower arrangement with Sally Trinder, from Whitchurch.

Mrs Gibson said she was pleased to win but added: “Since I was the only entrant in some categories the result couldn’t have been different.”

The show, which was held at Goring Heath parish hall in Whitchurch Hill, attracted 105 entries from 25 people in sections for fruit, vegetables, flowers, baking, art, crafts, flower arranging and photography.

The judges were villagers Margaret King, Rodney Davis, Sally and Lorna Woolhouse and photographer Jim Donahue, who is vice-chairman of Whitchurch Parish Council.

Sue Sexon, a member of the organising committee, said: “It was a very good day as the weather was good and we had far more entries than expected.

“The number of photographic entries was disappointing as a few of our regulars dropped out but overall we were happy with the numbers and quite a few people dropped in for teas.”

The Allotment Cup for most points in fruit and vegetables: John Coupland