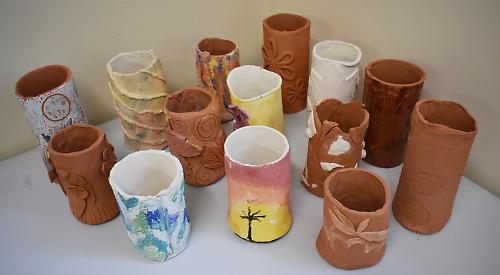 A LARGE-scale community art project has been launched in Whitchurch.

Volunteers have begun sculpting and decorating dozens of Native American-style ceramic totem poles which will be displayed on Pangbourne Meadow in September.

The group, led by Whitchurch artist Gill Williamson, met for their first workshop at the Old Stables, off High Street, and chatted over tea and coffee as they built the structures.

They rolled out clay sheets before wrapping them around cardboard tubes padded with newspaper, then added three-dimensional decorations such as flowers or icicles. Each one will be painted using coloured underglaze before they are fired to harden them.

They will then be threaded on to fence posts with help from tutors Debbie Page and Louise Clark.

The totem poles will form part of an exhibition called Equinox, running from September 8 to 23. This is the autumn equinox, when daylight and night-time hours are roughly equal.

They will be arranged in Fibonacci spirals, a pattern that occurs naturally in the plant and animal worlds, and will be of different heights to represent the varying levels of daylight throughout the year. The proceeds from donations will go towards the various charities and community groups that host Whitchurch’s weekly Art Café, which Mrs Williamson runs.

Pupils from the village primary school will be contributing cylinders and Goring Gap Festival has agreed to create several sections decorated with mosaic tiles.

Mrs Williamson, of Eastfield Lane, said: “There’s been quite a lot of interest already but the more people who get involved the better as I’m looking to create at least a couple of hundred segments. Pangbourne Meadow is a big site so we’ve got plenty of space to cover. I’m a little bit nervous as we’re charging for the workshops, although we’re not running it for a profit and just want to cover our costs.

“It’s a bit of an unknown quantity but we’re doing well so far and people are enjoying the experience. I’d be interested to hear from anyone who would like to help.”