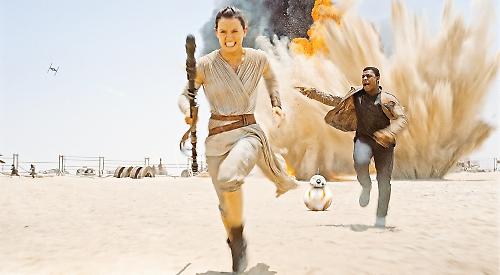 A COMPUTER programmer from Whitchurch has won an Academy Award for helping to create a special effects system that is now used in all major films.

Jerry Huxtable, 56, is one of five people who will be honoured for developing Nuke, a piece of software which is now the industry standard.

He will fly to Los Angeles with his wife Denise to collect it with his colleagues next Saturday.

The team will attend a ceremony at the Beverly Wilshire Hotel in Beverly Hills where they will be presented with the Academy of Motion Picture Arts and Sciences’ plaque. This is one step below the Oscar statuette, the Academy’s highest accolade.

Afterwards, Mr and Mrs Huxtable will enjoy a week’s holiday in the city.

Nuke has featured in the three most recent Star Wars films and many of the Marvel Comics adaptations, including the Avengers series, the Iron Man trilogy and Deadpool.

It was also the force behind every Oscar winner for best visual effects since 2010.

Other winners or nominees to have used it include The Martian, Harry Potter and the Deathly Hallows, Ex Machina, The Golden Compass, The Curious Case of Benjamin Button, Life of Pi, Hugo and the adaptations of Alice in Wonderland and The Jungle Book.

It is a “compositing” application, meaning it can blend real-life footage with computer-generated scenery, objects or creatures. It can also combine parts of two or more film sequences that were shot at different times.

Unlike older programmes, it can treat film, which is a series of flat, two-dimensional images, as though it existed in a real three-dimensional space and calculate the distance between objects and people in each frame.

This means it can superimpose artificial elements, such as spaceships, monsters or armies with the correct perspective so the image is more natural and realistic.

It can also synchronise the movement of a computer-generated object to the camera’s movement so it looks as though everything in the finished picture was shot at the same time in the real world.

Mr Huxtable works for The Foundry, a developer based in London which bought the rights to Nuke about 13 years ago. He was told about the award just before Christmas.

He said: “I was very excited. It didn’t seem real and I’m not sure it will seem real until we’re actually there.

“It should be good to meet other professionals but I’m going to have to wear a tuxedo and bow tie, which is a bit different. Like most computer programmers, I usually work in jeans and trainers!”

Mr Huxtable grew up in Hertfordshire and studied physics at the University of York before going into computing. His first job was creating project management software for a company based at Imperial College London, which he says was “all very dull”.

He then worked for Curious, which designed computer-generated maps for broadcast news and weather programmes. Although the quality has improved, the maps seen today are still based on technology he developed.

He and his wife, who have three children, Lia, 15, Jennifer, 19, and Tom, 23, moved to Crays Pond in the Nineties when he found work in Reading and they settled in Whitchurch in 2000.

Mr Huxtable joined The Foundry in 2006 and was tasked with improving Nuke. It had been designed specially for Titanic, which won a special effects Oscar in 1997 and the firm wanted to market it to other film-makers.

He and his team spent about four years improving the user interface and adding features like “particle effects”, which meant it could simulate smoke and dust clouds.

Mr Huxtable said: “It was our job to extend it, polish it up and make it a bit more ‘shiny’, if you like. It had been an ‘in-house’ product up to that point so it was pretty rough around the edges. It is incredibly flexible because you can work in a fully three-dimensional space and not just build up layers of effects over a flat image. It also doesn’t write the effects over the footage permanently so you never destroy your originals.

“However, it’s an incredibly technical product and if you just sat down to look at it with no prior knowledge you wouldn’t know what to do with it.

“It’s everywhere now. Pretty much every film uses it and because it’s such a niche industry there’s not a great deal of competition.

“I’m always amazed by what people can do with it. I’m always trying to work it out when I’m in the cinema but you have to avoid thinking too much like that or it will spoil the film.

“Hopefully, most viewers aren’t consciously aware of all this stuff and are just enjoying the film but these days so much of what we see doesn’t exist in the real world, it’s all done in post-production.

“It isn’t just for the obvious things like science fiction or fantasy. If you’re doing a historical drama, it’s far easier to shoot everybody against a green screen and put a city in the background afterwards than to scout for a location and shuttle all the necessary cast, crew and equipment there.”

Mr Huxtable is now working on a new programme which can simulate three-dimensional objects for a range of uses from film, television and computer games to construction and design projects.

He said: “I just fell into this line of work, really — it was a combination of various circumstances and talks with people I knew in the industry. I do enjoy films but I don’t really have time to go the cinema as much I’d like to.

“The children have taken more of an interest in my work since the award but I don’t think it registers with them much. I think they get fed up of me leaning over during a film and saying it was made using Nuke!”

Mrs Huxtable, who is a Whitchurch parish councillor, said: “It’s very exciting that Jerry won this award and I’m so pleased that he got the recognition after working so hard on the project.

“Jerry is very focused and committed to his work and feels very strongly about doing the best possible job so I’m looking forward to having a break and helping him to celebrate.”