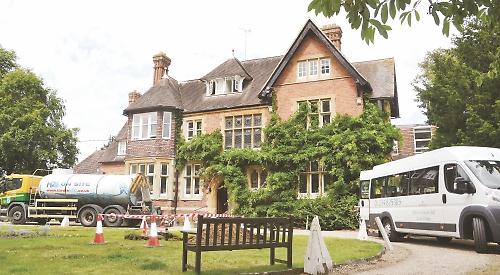 A VICTORIAN care home in Whitchurch must be demolished and rebuilt because it is not financially viable to extend it, according to the owners.

Majesticare, which has operated Eastfield House in Eastfield Lane since 2002, says the building cannot be adapted to accommodate the facilities that are expected of a modern care home.

It moved all the residents out in 2016 with the intention of building a £3million rear extension which would have increased the number of beds from 27 to 45.

Despite opposition from residents and the parish council, the company secured permission for this after winning an appeal against South Oxfordshire District Council’s decision to refuse it in 2013.

Now the company claims that independent research has shown that knocking it down and starting from scratch is the only way to turn a profit.

Estate agent Christie & Co carried out a study on the company’s behalf and says prospective residents now desire amenities such as a café, restaurant and cinema as well as hair, beauty and therapy rooms.

Majesticare says it would be impossible to provide these in the current premises, which contain many small, irregularly-sized rooms and narrow corridors. The ground floor of the building also has a lot of steps, both inside and out.

The new home would be built in the style of the existing red brick one and would have level storeys with 48 en-suite bedrooms plus “spacious” dayrooms and landscaped gardens.

It would have a similar footprint but would be slightly lower in height and with a larger basement to house services like laundry or catering, leaving more space upstairs for the extra facilities.

It would create up to 40 full-time jobs.

Visitors were shown artists’ impressions of the new home and filled out questionnaires giving their views.

Some supported the idea, saying it would provide much-needed care places for the district’s aging population, while others argued it was inappropriate development in Whitchurch’s building conservation area. Sue Matthews, who lives in Eastfield Lane, said: “I quite like it and don’t think it would sit too badly in its surroundings. The area is desperate for care homes so this is something people will need.”

Geoff Weir, of High Street, said: “This fulfills a need as there’s a recognised shortage of beds and this is a very attractive solution so I support it. They have to comply with modern standards so doing nothing wasn’t an option.”

Neil Huntington, who lives next door, said: “My wife and I are strongly against it and think the house should be retained as it’s probably the most important large, historic building in Whitchurch.

“This is not the first time that Majesticare has sought to demolish the property and it was roundly rejected by the district council and opposed by everyone living in the village.”

“Taking on more residents will attract more traffic on the lane, which is regularly used by parents and children of the primary school and is narrow with no pavements.”

After winning its appeal, Majesticare submitted two planning applications to demolish the building and construct a new 50-bed home, one of which would have preserved the original façade.

Both were refused amid strong opposition so the company said it would proceed with the extension and vacated the building, which has been a care home since the Eighties.

Majesticare spokesman David Madden said: “The proposed redevelopment of Eastfield House has been under discussion for some time and people’s expectations of what a care home should provide have changed dramatically in recent years.

“Our assessment made clear that the old scheme isn’t financially viable as there simply won’t be the space to provide the amenities people wanted.

“Having full-level access will also make things a lot easier from an operational point of view.

“We’ve had a broad range of feedback but we’ve already had a couple of people asking when it will open and whether they can register yet, which is promising.

“I appreciate that everyone will have their own views but I can assure the community that we genuinely want to respect the character of the area in the design of the building.”