Villagers turn old boat into a planter for competition 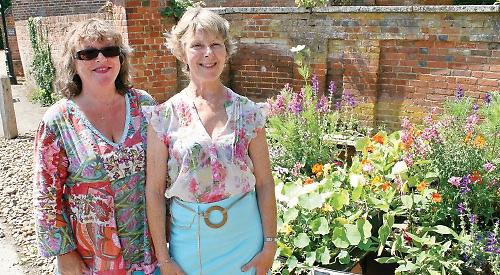 A DERELICT rowing boat has found a new lease of life as a planter in Whitchurch high street.

The 10ft wooden vessel, which was donated to the village by the Beale Park estate, near Pangbourne, has been installed at the entrance to the driveway leading to St Mary’s Church.

It has been filled with pots and troughs containing summer annuals including petunia, geranium, nasturtium, salvia, daisy and trailing lobelia.

The plants attract pollinating insects like bees and hoverflies as well as blackfly, which in turn attract butterflies to feed on them.

The work was carried out by the Make Our Whitchurch Special community group, which was set up last year. The volunteers cleared vegetation from the site and laid a weed-proof lining under a layer of pebbles on which the boat sits.

The plants were cultivated by Rosemary Brook at her home in Whitchurch Hill. Some of the containers were donated by Whitchurch Pre-School and there were also contributions from villagers Stan Remington and Sally Woolhouse, among others.

The group waters the plants at least once every other day and has entered the display in the Royal Horticultural Society’s It’s Your Neighbourhood, a smaller version of the Britain in Bloom competition.

Leslie Meynerd, who founded the group, said: “I’m thrilled to bits with how it looks and we’ve had some excellent feedback. We have also had a couple of negative comments so we’ll have to see what the general consensus is before deciding our next move.”