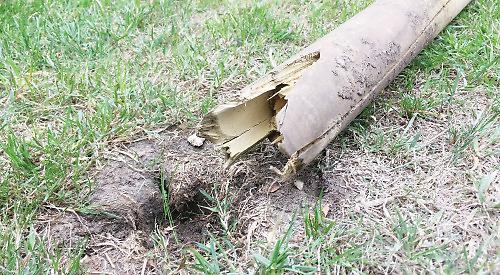 THE launch of a community art project by residents of Whitchurch, Goring and surrounding villages could be delayed until next year.

The Equinox Together installation, which comprises 84 totem poles made and painted by schools and community groups, was due to be officially unveiled in Pangbourne Meadow next Saturday.

But Gill Williamson, who is leading the project, discovered the ground was too hard to install the wooden posts following the summer heatwave.

The auger drill needed to create the holes couldn’t get a purchase and trying to bang in fence posts with a sledgehammer merely cracked them.

Paul Aspel, a builder based in Tidmarsh, has offered to try to install the poles using a digger with a specially adapted drill head but if this doesn’t succeed the work is likely to be delayed until May next year when the ground is expected to be softer.

Mrs Williamson, of Eastfield Lane, Whitchurch, said: “A friend of mine was going to put the fence posts in by hand but he was having real difficulty as they were all breaking.

“We thought it might be okay if it rained a bit but I spoke to some lawn experts who said it would need at least two weeks of constant drizzle to get the soil back to the kind of condition we would need. Paul got in touch with me and I’m incredibly grateful for his offer as it’s at least a day’s work but he has to hire a special component for the digger and we won’t know if it will work until a few days beforehand.

“It would be a disappointment if we had to postpone it but everyone who’s taking part has been warned that it’s a possibility. It will definitely go ahead and everyone is excited about the launch, whenever that may end up being.”

Mrs Williamson, who runs Whitchurch’s weekly art café, and her volunteers began holding regular workshops for the project at the Old Stables, off High Street, in January.

The team made sections of the poles out of clay then painted or decorated them before they were varnished. The 500 or so segments, which are themed around the four seasons, will be threaded over the posts, which will be arranged in a Fibonacci pattern, a type of spiral which is often seen in nature such as a snail’s shell.

Once the installation is finally in place, visitors will be invited to complete a quiz with questions about the seasons and encouraged to make a donation with the proceeds going to local causes. Mrs Williamson said: “This is not a problem I thought I would end up having. If anything, when I did my planning my main concern was that the ground would be too wet and the poles would not stand up properly!

“However, it was a much drier summer than expected. I gather the team doing roadworks at Cow Lane in Reading recently dug to a depth of 15ft and still weren’t hitting water, which gives you some idea.

“Now it’s just a case of waiting and seeing and hoping for the best.”

This summer, they worked together again to produce a “wishing well” for the River & Rowing Museum in Henley, which will be part of its 20th anniversary exhibition which opens in the community gallery tomorrow (Saturday) and runs until October 28.

Visitors will be encouraged to write the things they like about the museum and improvements they would like to see on scraps of paper and leave them in the well.

Mrs Williamson created the well base using an old flower pot and scraps of cardboard while Mrs Livesey decorated it.

Most of the adornments are leftovers from the earlier project and include a leafy canopy with three owls perched on it, a fox, a spider with its web and a patchwork frontage decorated with flowers.