Totem pole artworks put up in meadow after all 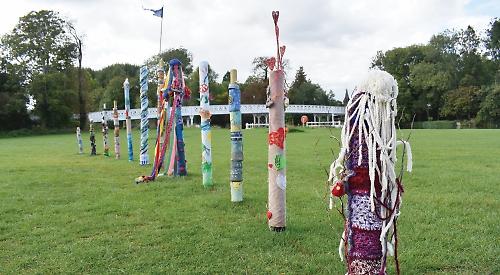 A COMMUNITY art project created by residents of Whitchurch, Woodcote and Goring has gone ahead despite fears that it would have to be delayed.

Eighty-four totem poles have been installed at Pangbourne Meadow as part of the Equinox Together project, which was launched by Whitchurch artist Gill Williamson earlier this year.

Each pole has been threaded with cylindrical clay segments painted or decorated by schools, clubs, businesses and community groups to represent the different seasons.

The poles are of varying heights to symbolise the changing number of daylight hours throughout the year and are arranged in a Fibonacci pattern, a type of spiral that occurs naturally in animals and plants.

Earlier this month, Mrs Williamson feared the project would have to be postponed until May as the ground was too hard to install the poles by hand following the exceptionally hot and dry summer.

However, just five days before the display was due to be unveiled, Mrs Williamson received an offer of help from Damien Per, who is the manager of the Ferryboat pub in Whitchurch.

Mr Per, a former professional fencer, rented a petrol-driven auger from Henley tool hire firm Southern Plant which he used to create the holes for the poles with help from villager Martin Clow and Pangbourne parish councillor Peter Maciver.

The exhibition opened as scheduled and will run until at least next Sunday (October 7), although Mrs Williamson hopes Pangbourne Parish Council, which is responsible for the meadow, will allow her to stay for another week or so.

Visitors can pick up leaflets at the site with information about the poles and a quiz for children.

There are also boxes for donations with the proceeds to be split between good causes in Whitchurch and surrounding villages.

Afternoon tea and snacks will be served at the neighbouring Adventure Dolphin centre from 2.30pm to 4.30pm on Saturdays and Sundays.

Mrs Williamson said: “There aren’t enough words to describe how stressful this process has been. It was a real emotional rollercoaster because I thought it would be delayed. Fortunately, Damien spotted me looking upset in the Ferryboat and was kind enough to help out.

“I’m very grateful to him and his team as well as Southern Plant, who were very understanding and turned everything around quickly.

“It wouldn’t have been the end of the world to postpone it but I didn’t want to disappoint all the people who’ve taken part and I’m so glad that we were able to go ahead as planned.

“I wasn’t sure how the installation would go but it was actually incredibly easy. It only took four hours to get the poles in and then we set the rest up the day afterwards.

“It looks great and it’s wonderfully accessible for children and families. We’ve had a lot of positive feedback from visitors as well as the contributors, most of whom have now been to see the finished result.” There were some concerns when travellers set up camp at the opposite end of the meadow.

Mrs Williamson said: “We were a bit worried because they can be an unknown quantity.

“In the past, travellers have left a bit of a mess on the meadow but they were respectful of the exhibition and left a few days later.

“Despite that and a few other minor issues, it has gone very smoothly overall and it’s great that so many people have been able to showcase their creativity.”

This is the second project Mrs Williamson has led since last year’s Thames Path Together “yarn bombing” exhibition.

She and fellow villager Alison Livesey assembled dozens of contributors who covered Whitchurch bridge in hand-knitted scenes inspired by views along the river.