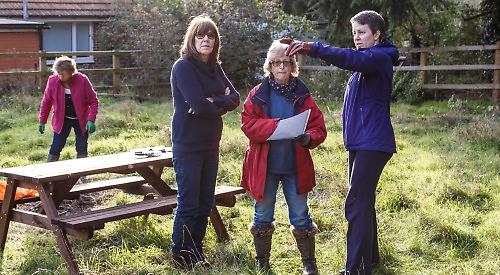 A MEMORIAL could be built in honour of the Polish chapel which was set up in Whitchurch after the Second World War.

The village’s green team, led by resident Alexa Duckworth-Briggs, has drawn up plans to tidy the site off Manor Road and build an area where people can relax and reflect.

After clearing away overgrown plants, the volunteers could lay a concrete base on top of a gentle earth slope which would have a timber surround and be accessed by shallow steps or a ramp.

Measuring up to 5m by 7m, the area would have planters, one at each corner, an upright wooden cross and two benches.

There could also be an information board explaining the history of the site.

Whitchurch Parish Council has agreed to fund the work and has chosen a supplier who will liaise with residents and the neighbouring Coombe Park estate.

On March 21, the group will carry out its next clearance session of the site and plant trees. Anyone wishing to help would be welcomed.

The group would also like to hear from anyone who can share photos or information that could be used on the board.

Mrs Duckworth-Briggs said: “We’ve got quite a few people involved, including some with longer-term family connections to the site whose parents used to worship at the chapel.

“We met at the site a couple of times last year and now I’m looking for some more detailed ideas about planting.

“We also want to get some ideas from the local Polish community as to what improvements might be most indicative of Polish culture.

“I don’t yet know when we’re hoping to get it done but we’re meeting the contractor soon and also discussing access issues with the owner of Coombe Park.

“Unfortunately, the site has been a little bit neglected but creating this area will enable visitors to enjoy quiet contemplation or picnics.

“It was a well-used area until about 10 or 20 years ago and it would be good to get it back into service and to have as many people as possible involved.

“It has lovely views and is a wonderful place to relax or go and play with the children. This will bring it back into use while respecting its history.”

The site was originally Coombe Park Camp, a temporary collection of 48 Nissen huts built to house Canadian and American pilots during the Second World War. It also had four buildings, of which only one survives and is now the village hall.

After the war, the Ministry of Defence transferred the land to Oxfordshire County Council to house mostly Polish refugees.

The chapel was founded in 1956 and hosted services overseen by a visiting priest from Reading until about 1992, when attendance was too low for this to continue.

The chapel bell was donated to the Sacred Heart Polish Church in Reading and the building was torn down in 2014 after crumbling due to years of neglect.