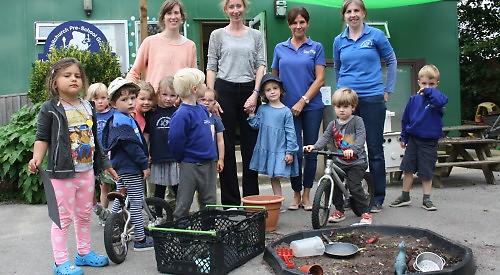 WHITCHURCH Pre-School is campaigning to raise the £20,000 in income it lost as a result of the coronavirus outbreak.

The nursery, which operates from a portable cabin in the grounds of Whitchurch Primary School off Eastfield Lane, has looked after all 34 children during the lockdown, either on site or remotely, but stopped charging fees to help their families cope with the financial impact.

As a result, it has suffered a £14,000 shortfall and also had to cancel the inaugural Whitfest, a family fun day on the village green which was due to take place on May 2 and was expected to raise £6,000.

This means the pre-school will have to delay its plans to replace its premises, which are at least 20 years old and showing signs of wear and tear.

A newer cabin would cost about £160,000, some of which could come from grants.

The management committee was close to going ahead with the upgrade after obtaining estimates but must now wait until it can recoup the losses.

The pre-school’s future is secure but the committee says the setback is disappointing and it doesn’t know when the building project will get back on track.

When the lockdown was announced on March 23, the pre-school sought help from the Government but wasn’t eligible for relief funding because it doesn’t pay business rates, which the payments are based upon. It continues to receive a statutory contribution from Oxfordshire County Council, the education authority, but would have got this anyway so it doesn’t make up for the loss.

It should be able to claw back about £3,000 from furloughing some of its five staff.

Melanie Uglow, who chairs the committee, said she didn’t stop the service because some families were struggling financially and running out of ideas to keep their children mentally and physically occupied.

As well as providing remote lessons over the internet for older children, her colleagues handed out activity packs and offered advice on games and activities which younger ones could enjoy.

The pre-school re-opened on June 15 after conducting a risk assessment but can only accept a maximum of 16 children to comply with social distancing rules. The rest must stay at home and keep using the remote services.

Mrs Uglow, whose daughters Imogen, four, and Olivia, two, attend the pre-school,  said: “We’ve been impressed by what we’ve been able to offer for our community. We had to set up a virtual operation almost overnight and ensure we stayed in contact with individual families to help with behavioural issues.

“Because we have so many volunteers on our management committee, our costs have been very low on paper but there’s still an impact — it’s just something we can’t claim for because it isn’t measurable.

“The pre-school will be fine in the long run and will continue to have a really strong offering, especially outdoors where we’ve got a new allotment. That’s particularly crucial because children have been deprived of so many things lately.

“However, we’re in desperate need of a new building and now that’s just going to get pushed further and further down the line because we’ve got to prioritise closing the funding gap.

“Our plans were still at a fairly early stage but we’d started engaging with suppliers and were looking at having funding in place to do it next summer.

“It’s always hard to get these things going when you have a transient community.

“The existing cabin is still fine but the pre-school bought it second-hand more than 20 years ago so it’s not in the best condition. It’s a bit worn in places and doesn’t make the best use of the space.”

Mrs Uglow, who moved to the village 18 months ago and became chairwoman of the committee about six months later, said she hoped the pre-school’s reputation would ensure a good response to the appeal.

She said: “So far we’ve only publicised it among our community but there’s a lot of good feeling towards us. Almost every villager in their twenties or younger came here so it’s a very emotional subject.

“As tough as this financial problem has been, our main focus has been the wellbeing of our families because without them we’re nothing.

“I didn’t feel that we could charge fees at a time when everyone’s struggling. There’s no precedent for handling a situation like this and I gather some pre-schools simply closed but we didn’t want to leave anyone by themselves.

“Coming here would give children a lot of stimulation and tire them out but now some are having sleep problems, which has a knock-on effect for the whole family during the day.

“Our staff have a lot of experience so they’ve been able to suggest activities to focus their energies on. We’re incredibly grateful for everything they’ve done.”

To make a donation, visit https://donate.giveasyoulive.com/fundraising/whitchurchonthamespreschool

•An online bingo party raised £431 for the pre-school. Forty villagers took part in the event and competed for prizes donated by local businesses including Warmingham estate agents in Goring, the Ferryboat and Royal Oak Hair Design in Whitchurch and the Camper Café.