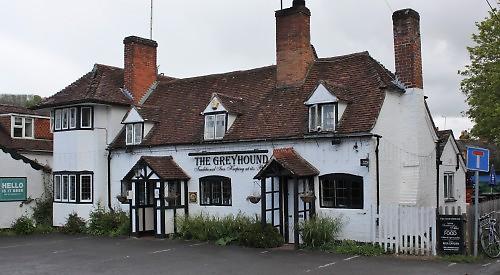 ONE of Whitchurch’s two pubs has been saved from conversion into a house.

The Greyhound in High Street has been sold to Oak Taverns, a family-run operator based in Thame which owns 13 other premises, including the Red Lion at Chinnor and four breweries.

Punch Taverns put the pub on the market about six months ago, saying it was no longer viable.

Several parties expressed an interest but Oak was the only one not seeking a residential conversion.

It believes the Greyhound can still turn a profit as a “community local” selling mostly craft beers and spirits and not serving meals as it currently does. It might occasionally host trucks selling outdoor food provided by other businesses.

The pub could undergo a “sympathetic” refurbishment but Oak says it would keep its existing character.

The sale has been welcomed by Whitchurch Parish Council, which had told Punch it opposed any change of use.

The council believes Oak will look after the premises but still wants to have the pub listed as an asset of community value by South Oxfordshire District Council with the help of the village’s representative, Councillor Peter Dragonetti.

Landlord Mark Lovett, who arrived in April 2017, faces an uncertain future as Punch has given him notice to leave on July 22, when the pub officially changes hands.

He has asked Oak about staying on but he would have to become an employee rather than a leaseholder so he is also looking to run a pub elsewhere. The Greyhound could be closed for a short period for redecoration before opening again in early August.

Mr Lovett is the longest-serving tenant in many years as the Greyhound struggled under a rapid succession of landlords following the departure of Bob and Carole North.

It had been shut for six months when he took over so it made little profit at first but Mr Lovett says trade took off in the year before the coronavirus lockdown was imposed in March 2020.

He spent time hosting regular events and building relationships and also refurbished the premises before re-opening when the rules were relaxed last summer.

He says trade has been good since the pub opened again last month for outdoor drinking following the third lockdown.

Mr Lovett, who previously worked at a pub in Croydon, said: “It’s such a shame as I’d just got the place where it needs to be.

“I feel like the rug has been pulled out from under me.

“We had everything repainted, including a new mural, and I bought loads of furniture for the beer garden.

“This is the first pub I’ve run and I was so proud to reach this point. When I started, it hadn’t had a permanent run of staff for years and had even shut for a while, meaning customers were drifting away so it was always going to be hard to bring them back.

“Punch probably looked at my first two years’ figures and thought ‘he hasn’t done much’ but more recently the picture would be very different. Most of the regulars know what’s happening and will be sorry to see me go.

“I always wanted a traditional country pub and quickly came to love this area so I’ll be looking for somewhere similar. It would be nice to stay around here but you have to go wherever the right opportunity is.

“That said, I’m sure the new owners will be a great fit because they like to do things properly. I have no doubt that they’ll invest in ways which Punch either wouldn’t or couldn’t, and which I couldn’t personally afford.”

Simon Collinson, managing director of Oak Taverns, said: “This site came up at the perfect time for us and the deal was agreed very quickly.

“We’ve taken on many pubs that were sold as ‘unviable’ but they’ve thrived as a quality wet-led operation. Not serving food is controversial, and my bank manager certainly doesn’t understand it, but we do everything at the highest standard. There are already excellent food options locally so why compete?

“I believe we’ll be the area’s best cask beer pub with an interesting range. It’ll be the kind of pub everyone wants at the bottom of their street and not many operators offer that these days.”

Jim Donahue, chairman of Whitchurch Parish Council, said: “It’s a private business so there’s nothing for the council to do at this stage but it’s a good outcome for the village.

“I’m sure the new owner will be more enthusiastic than Punch, which had been looking to get rid of the Greyhound for some time.

“We hope the changeover goes well as there are only two pubs in this community, each very important in its own way, and we have not got many other amenities so we want to protect them.”

Earlier this year, the district council passed a motion put forward by Cllr Dragonetti obliging it to protect all pubs, regardless of whether they were officially community assets.

He said: “I knew the Greyhound had been on the market, on and off, for some time and there were concerns about its future so I’m very pleased to hear it has been sold to a pub operator.”

Punch first advertised the Greyhound for sale in 2014, saying it had “residential potential”, with an asking price of £475,000.

Previous landlords include Ruan Keegan, who took over from the Norths in 2014, and his successor Nick Baker, who suddenly quit in 2016. He was replaced by business partners David Langford and Ray Cameron, who both left within about seven months to be replaced by Andy Prior.

Punch Taverns did not respond to requests for comment.