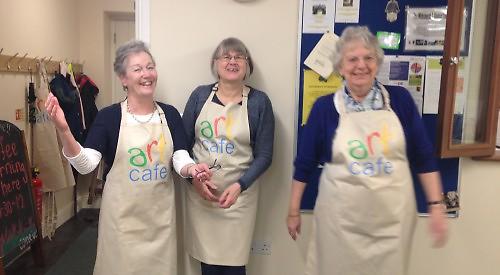 A WOMAN who has run the art café in Whitchurch for six years has stepped down.

The weekly community event was started in November 2015 by Gill Williamson with help from Yvonne Kerevan, Sue Matthews and the late Pam Wilkinson.

It takes place at the Old Stables in High Street every Saturday when visitors can buy works by local artists and take part in arts and crafts while enjoying homemade cakes and hot drinks which are sold for charity.

Over the years, the café has raised more than £60,000 for charities.

Mrs Williamson, who lives in Eastfield Lane, Whitchurch, ran her last art café in honour of Mrs Wilkinson, whose family donated a print of the collage Mill Pond at Whitchurch-on-Thames by Whitchurch artist Chris Scoby-Smith.

A donation of £300 was made to Sue Ryder from the proceeds of the event and an auction in memory of Mrs Wilkinson.

Mrs Williamson, who has lived in the village for 20 years and has an art degree, now plans to focus on community art projects like the “yarn bombing” of Whitchurch Bridge in 2017 when it was covered in more than 100 pieces of art, helping to raise £5,000.

Mrs Williamson said: “I’m stepping down to give someone else a chance to run it and get some new ideas in.

“We set it up as a community art café every Saturday, showing art and raising money through selling cakes. It has been on every Saturday for six years apart from Christmases and during covid.

“It was a nice sort of thing where you get the community together and it was community organised.

“I used to get the art together and show works by eight local artists each week so now we’re looking for people to come in and show their art.

“I’m very proud of it and all the money we’ve raised. Four of us set it up and I was there every week. It was an honour to be involved.

“I’ll look back most fondly on the sense of community it created. It was a major achievement with people bringing cakes along and making them with a group of friends. The art café will continue to provide a meeting place for friends to enjoy tea, coffee and homemade cakes while browsing art and crafts from local artists.”

In 2018 Mrs Williamson raised £5,000 by encouraging villagers to make a series of clay totem poles inspired by the seasons.

Geoff Weir will be taking over bookings and art displays for the art café. He can be contacted by email at oldstablesbookings@
btinternet.com