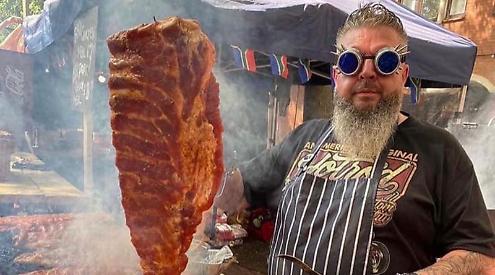 A PUB landlady has found an unusual way to attract customers — street food.

Lottie Mitchell took over the Greyhound in High Street, Whitchurch, in February when it re-opened after being refurbished by the new owners.

But she didn’t want to offer traditional “pub grub” so instead she invited pop-up street food vendors to operate out of the car park on some weekends.

Ms Mitchell, who has worked in hospitality for years and used to run the Cross Keys pub in Pangbourne, said: “It is brilliant — they turn up, they sell the food and we sell the drinks. It is a happy union. I know a lot of them from the Cross Keys.

“The response has been brilliant. People are loving it.”

Most of the vendors come from Reading and Wokingham and include Fink Street Food, the BBQ Brothers, Burger at Friends and Strawberry NutNuts. Ms Mitchell said: “We’ve had burgers, tacos and Nepalese street food.

“BBQ Brothers were great with the theatrics of it. They had a huge barbcue and were whacking stacks of ribs on and the smell... I thought it was going to cause an accident on the road as everyone was looking as they drove by.

“We were chock-a-block all night, which was brilliant.

“A lot of people ask are we going to do food but I quite like not doing it and if I did it, it would be the same generic type of food offering all the time. You would change the odd dish but you would always know what it was.

“But we are going from barbecue to meadow boxes to Gurkha street food. I have Japanese food coming soon. It gives the village a real focal point and we are dragging people over from Pangbourne now, which is fabulous.

“In any case, chefs are just not around and the ones that are cost an awful lot of money and how are you going to afford that with four covers at lunchtime?”

The Greyhound is a former ferryman’s cottage with wooden beams and open fires.

Last year it was saved from conversion into a house after being bought by Oak Taverns, a family-run operator in Thame which owns 13 other premises and four breweries.

Punch Taverns had put the pub on the market, saying it was no longer viable.

Several parties expressed an interest but Oak was the only one not seeking a residential conversion.

The sale was welcomed by Whitchurch Parish Council, which had opposed any change of use. Oak said it believed the Greyhound could still turn a profit as a “community local” selling mostly craft beers and spirits as well as hosting food trucks occasionally.

Ms Mitchell, who lives on the premises, liked the idea of visiting vendors so she asked other Oak pubs having them for names.

She said: “We will keep the food vans going for as long as possible. In future, we might get the street food people to do a three-course meal or something. There is loads of scope and these businesses are up for interesting things to do.

“We have a lot of locals who come every time and each time they say, ‘This is the best’.”

The Greyhound will also host live music events roughly once a month after two live acts during the recent platinum jubilee celebrations were successful.

Ms Mitchell added: “The biggest stress is making sure no one parks out in front.”