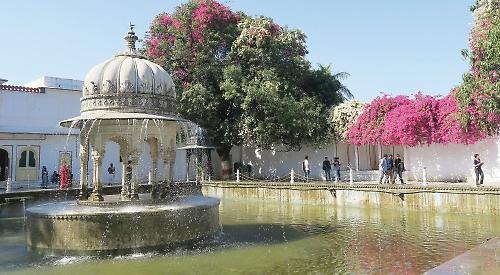 PRESIDENT Adrienne Rance welcomed 36 members to the village hall on Wednesday, January 18 for our first meeting of 2017.

She welcomed guest speaker, Wargrave resident Peter Mayes, who gave us a talk about the Mughal gardens of India.

Peter was stationed in Bangladesh (Muslim East India) for three years in the mid-Eighties and became passionate about the gardens and their history, which dates back more than 200 years.

The dynasty of six emperors founded by Babur ruled from the 15th century to the 18th.

They developed a love of gardens, often incorporating water features and large temples.

Such a contrast to the large-scale slaughter of local populations in the conquest of Eurasia by Genghis Khan.

He established the Mogul Empire that covered an area of more than 12 million square miles. The territory stretched from eastern Russia to the borders of Europe.

Khan’s success established the Silk Route for trade from east to west and gave the nomadic tribes a single language.

Peter reminded us that Bangladesh has a subtropical monsoon climate characterised by wide seasonal variations in rainfall — at least 80 per cent of rain falls during the monsoon period (June to October).

There are not ideal conditions for the typical English garden but not impossible, as Peter and his wife Sue proved.

The couple brought their passion back to England by transforming a rather dull, flat garden into an impressive Mughal-style terraced garden.

Peter showed a slide of the famous Taj Mahal of Agra.

The most well-known example of Mughal garden architecture, it is listed as one of the Seven Wonders of the World, built by the Mughal emperor Shah Jahan.

I am sure a few members have seen this shrine, which was built entirely in shining white marble in everlasting memory of Jahan’s wife, who died in 1631 while giving birth to their 14th child.

Peter talked about the mountainous region of Kashmir, some 8,000ft above sea level. This is where the magnificent Chinar trees (oriental plane) flourish.

They can grow as high as 25m with a girth of 50ft and in autumn their colours are a stunning red, mauve, amber and yellow. Some of the trees are more than 400 years old.

The Mughal gardens of Naseem Bagh in Srinagar have more than 100 Chinar trees.

A delicious tea was served by hostess organisers Diane Bush and Judi Rowlands.

Our next meeting will take place at Crazies Hill village hall on Wednesday, February 15 at 2.30pm, when we will welcome the return of amazing wildlife photographer Tom Way.

There will also be a bring and buy table. All are welcome.