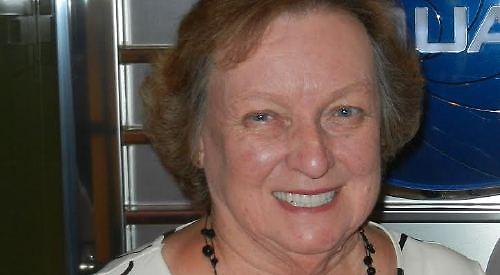 Patricia Ann Curtis Eades was born in Nottingham on January 30, 1941, the eldest of two daughters.

She attended West Bridgford Grammar School and met her future husband Bill at the church youth club in 1956.

After an initial apprenticeship in hairdressing, Pat started work as a secretary, a role which she came back to in later life.

Pat and Bill were married in 1961 and initially lived in West Bridgford before moving to Radcliffe-on-Trent then Newark. They had two sons, Mark and Richard.

In 1972 the family moved to Marlow when Bill obtained a new job with the NHS in East Berkshire. They moved to Bourne End in 1977.

On moving to Marlow, Pat helped run her father’s newsagents before becoming a district nursing auxiliary. She then found her niche working as a medical secretary in the special care baby unit at Wexham Park Hospital before moving to private practice in Windsor.

In her spare time, Pat did catering for private events and baked cakes for a café in Marlow run by one of her sons. Pat joined the WI in Nottinghamshire in 1964 and remained a member until her death, taking on a range of organising roles, including most recently honorary treasurer of the Oxfordshire Federation and training advisor.

She was instrumental in setting up or supporting several WI groups around Henley.

Pat also involved herself in her sons’ schools parents’ associations and helped with the catering on match days and tournaments for mini rugby at Marlow Rugby Club in the Seventies.

She was also an officer in the St John Ambulance in Windsor and Maidenhead.

Pat and Bill returned to Marlow when they retired before relocating to Henley about eight years ago.

They became members at Phyllis Court Club in Henley more than 20 years ago and joined both the bridge club and croquet section.

Pat won golf croquet competitions and also served as the secretary of the section. Bill died in 2016, having suffered with Alzheimer’s disease in later life.

More recently, while not playing as much croquet as before, Pat still enjoyed spending time showing new members how to play. She also started to play canasta at Phyllis Court Club and joined the jazz section.

Pat was renowned for always being busy. She enjoyed music, theatre and travelling and in recent years had visited the Far East and South America.

Known for her warm smile and for always being welcoming, she enjoyed socialising with friends.

The family received a significant number of messages of condolence from local WI branches, the county and individual members

Pat will be sorely missed by her family, including five grandchildren whom she adored, and her sister Sue, who lives in Henley.

Her funeral took place at St James’ Church in Bix on January 9, which was attended by more than 130 family and friends and was followed by burial at Fairmile Cemetery in Henley.