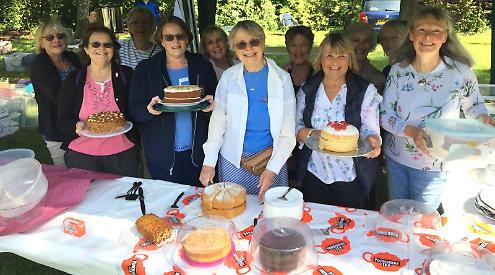 THIS year our branch of the Women’s Institute celebrates its 60th birthday.

It will do this in style with a dinner for members at the Highwayman at Exlade Street.

The Cleeve-by-Goring branch first met in May 1962 at Goring Primary School. There were already two WI branches in the Goring Gap, at Goring and Streatley, but both met in the afternoons.

The Cleeve-by-Goring institute was formed for those who could not attend in the daytime due to work or family commitments and so it has always met in the evenings.

A mark, perhaps, of the sagacity of the decision is that the Cleeve branch is still going strong whereas, sadly, the others have closed.

Six of the current members joined the branch 40 or more years ago and Doreen Diplock, who moved to Staffordshire a couple of years ago, was one of the founder members and recently celebrated 60 years of membership of the WI with her new branch.

Meetings moved after a few years to the old scout hut on Icknield Road where members braved cold, damp and dodgy electrics.

Thankfully, the scouts found money for a new building, prompting a temporary move by the WI until Storton Lodge opened on the site, where we continue to meet in its warm hall with its well-equipped kitchen.

The number of members has varied over the years between 40 and 50. Currently we have 41 and would welcome more.

The format of meetings has not changed significantly. The main feature is a speaker or a demonstration, with a competition related to the topic followed by a discussion of regional and national WI business.

Of course, the most important part of the evening is the break in the middle when refreshments are served and everyone can have a jolly good chat. Many friendships have been forged at our meetings.

We have always also held craft sessions and quizzes. Recent highlights include a talk on swan upping by David Barber, the Queen’s swan marker, a cheese-tasting session organised by Cheese etc of Pangbourne and a demonstration and talk by the Medical Detection Dogs charity. The branch has also always arranged visits to local attractions such as the Island Farm Donkey Sanctuary and Brightwell vineyard.

Our monthly local walks provide an opportunity to socialise while taking exercise and always end with a welcome hot drink in a nearby café.

Wacky Christmas parties are a tradition. Our albums have photographs of the “local talent” in a self-penned and off-beat production of Cinderella and another entitled Cleeve Chicken Sandwiches.

The 2021 Christmas party featured a sword dance, comic songs and readings and carols accompanied by Ted Morse on the accordion.

The branch’s annual summer party is another long-standing event. This was originally called the Strawberry Supper and was held in Nun’s Acre river garden.

More recently, it has morphed into a colour-themed evening of food and entertainment.

Several sub-groups have been formed over the years. The reading group started in 2005 and is still flourishing. A craft group and a “knit and natter” group thrive.

The WI craft group contributed many of the new hassocks for St Thomas’s Church in Goring in 2000.

Alas, the WI darts team has come and gone.

Cleeve-by-Goring WI has always participated in village events, often providing the teas and homemade cakes for which the WI as a whole is famous.

At one time we were asked regularly to cater for coach parties visiting the Gap.

We are perhaps best known for our August Lock Teas (in recent years accompanied by the Goring and Streatley Concert Band), which have been going since 1967 and have raised about £24,000 for local charities in the process.

The branch offers support to others in need, such as making regular contributions to the Wallingford food bank and donating “pennies for friendship” to the Association of Country Women of the World, which runs overseas projects to help women in developing countries. Most recently, members have contributed to the humanitarian cause in Ukraine.

Cleeve members have always been enthusiastic participants in these events, making visits to such places as the Royal School of Needlework at Hampton Court Palace, Stratford-upon-Avon, Westonbirt Arboretum, Portsmouth Historic Dockyard, Tate Modern and Winchester Cathedral.

Our albums also contain pictures of members on WI holidays to Scotland, Cornwall and Jersey.

The Oxfordshire Federation’s annual competitions on design, produce and crafts and its annual quiz are popular with Cleeve members. Several stand out as craft stars, producing many clever entries.

We have also taken part in the Federation’s Science Week challenges at the Rutherford Appleton Laboratory and won the prize for constructing a moon buggy in 2006.

Nationally, the WI campaigns on issues put forward by its members. Recent topics include mental health, cervical screening and microplastics. Combating climate change has been a theme for several years and the Cleeve branch has its own champion on this issue.

While meetings largely ceased during the coronavirus pandemic, 36 newsletters were produced to keep members informed and telephone support groups established. When we could, we got out for group walks.

Several members died, however, and it was painful not being able to attend their funerals.

A significant casualty was the permanent closure of Denman College, the WI’s national training centre near Abingdon, where Cleeve members had spent many happy hours.

The funds from the sale and the many bursaries that were gifted to the college are due to be reinvested in new training ventures but we wait to see the plans.

Cleeve restarted face-to-face events with a summer party, In the Pink, last August. Meetings at Storton Lodge since then have been well attended. A programme of events has been put together to carry us through to spring 2023. Real, as opposed to online, county and national federation events are also slowly restarting.

On April 2, we ran the Goring spring litter pick.

We look forward to our birthday celebrations and to participating in the Queen’s platinum jubilee weekend when we will serve refreshments at the local history society’s exhibition on the Fifties.

We remain true to our desire to provide a friendly, safe and interesting place for women to meet.

• Cleeve-by-Goring WI meets at Storton Lodge at 7.30pm on the second Wednesday of each month. New members are very welcome — just come along on the night or call Chris Cox on (01491) 872980.