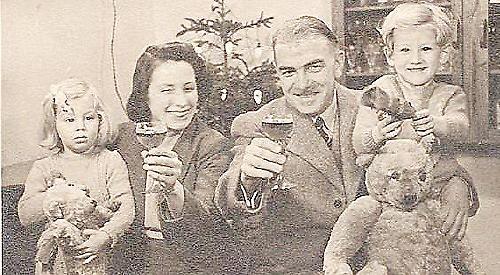 Unfortunately, our speaker Mr Mole was indisposed but one of our very brave members, Selina Avent, stepped into the breach since she had previously given talks on deaf awareness.

She gave us a very interesting and informative talk.

Selina grew up in a household where both her parents were deaf. Her mother had been born deaf due to a faulty gene inherited from her married grandparents, who were first cousins, but her father became deaf when he was 12 years old after contracting meningitis from a soldier he sat next in a cinema in 1923.

Since her father was not born deaf, both Selina and her older brother were hearing.

Job opportunities in those days were very limited for deaf people but her father built up his own photographic business in London while her mother worked as a seamstress at Liberty in London.

Although Selina’s father could talk, language was limited in their household, so her parents, on advice from their doctor, bought a radio for them to help with their language.

The children were sent to nursery at a very young age. There they would be surrounded by all sorts of sounds, especially talking.

When the war siren sounded, Selina would run to the back door, start biting her nails and crying, which alerted her mother to take shelter as the bombs fell in Enfield.

Her father refused to be part of the deaf world, so he never learned to lip-read like her mother, preferring to communicate only with the two-handed finger spelling alphabet.

The drawback to this, for him, was conversation at the dining table meant that their meals became cold. Her father overcame this by making a table with four electric hotplates!

Another problem for them was anyone knocking at the door. He overcame this by putting lightbulbs in every room in the house and then wiring it up to the doorbell.

This necessitated putting a label next to the bell, saying “silent bell” to stop people from continually pushing the button because they could not hear the bell.

How things have improved for deaf people since Selina was a child. Her parents were limited to the Sunday morning television programme See Hear. If they wanted to go to the cinema they would have to select a foreign film with subtitles. These were few and far between and most of them were “awful”.

The arrival of the fax machine was really valuable to Selina’s mother as it was a great way for mother and daughter to communicate after Selina had married and moved away.

Selina also gave us some very interesting facts about deafness. Some nine million people are either deaf or hard of hearing in the UK.

Like our accents, there are different signs for the same word. For instance, “holiday” has 10 variations.

Grammar, too, is very different as we say, “What is your name?” while a deaf person would say, “Your name what?

Selina then demonstrated the two-handed finger spelling alphabet, which we all had fun learning.

This is when the fingers starting from the thumb are five vowels and the consonants, other than “C”, are formed with both hands.

We were shown the signing for farm animals and had to guess which animals they were.

Selina gave us some very useful tips for communicating with deaf or hard of hearing people including always face the light so they can clearly see your lips forming shapes, remove sunglasses, keep your hand away from your mouth and, above all, be patient.

If they don’t understand you, try using other words or write them down on paper.

Selina gave us fascinating alternatives to the usually accepted Seven Wonders of the World as seen by a seven-year-old girl in America. They were to see, to hear, to touch, to taste, to feel, to laugh and, finally, to love. We all agreed that they were an excellent substitute.

To finish her talk, Selina wanted us to remember how precious hearing is. She asked us to close our eyes while she played a CD of beautiful theme music from the film Out of Africa. This certainly emphasised how fortunate we are to be able to hear.

Members then relaxed over a superb tea prepared by Pam McGow and Glynis Gothard.

Our next meeting will take place at Crazies Hill village hall on Wednesday, January 16 at 2.30pm when local Peter Mays will give a talk entitled “The Moghul Gardens of India”.