Wine dinner was in the best possible taste 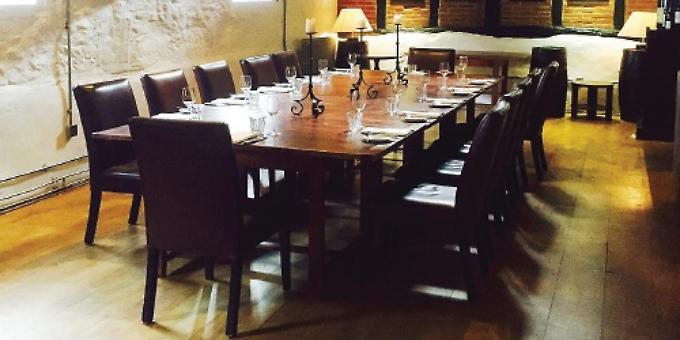 WINING and dining, eh? I don’t know about you, but when I eat out the emphasis tends to be rather more on the latter than the former.

But what if it was the other way around — or at least even-steven?

The very best restaurants — the ones with the Michelin stars — seem to be those that aim for a kind of parity between food and drink in pursuit of the greater culinary whole.

Even if you know your way around a wine list, one of the eternal questions of taste is that of which wine is best paired with which food.

We Brits have come a long way since the Abigail’s Party days of the mid- to late-Seventies, when bottles of Blue Nun tentatively did the rounds of dinner parties soundtracked by Demis Roussos and Nana Mouskouri.

However, wine is such an enormous subject — a universe in itself — that a helping hand is always welcome.

It is for something like this reason, I think, that the Hotel du Vin & Bistro in New Street, Henley, has begun hosting a series of wine dinners.

The first of these took place early last month, when Nadia Rae of Bibendum was our expert guide to “Old World” versus “New World” wines — all paired with a seasonally constructed menu designed by the Hotel du Vin’s head chef. My dining companion for the evening was an old friend from university, Phil Relf, who almost went into the wine trade himself back in the heady days when the world was our oyster.

Appropriately enough, on sitting down to the second of our five courses, we found that it was a most refreshingly flavoured scallop ceviche — scallops finely cut and marinated in lime juice, salt, sugar, pomegranate, chilli and baby coriander.

To give the general flavour of how the evening went, this course — like the remaining three “sit-down” courses — was paired with two wines: a Sancerre Blanc, Domaine de la Chezette, from France, and a Huia Sauvignon Blanc from New Zealand.

Here I must give way to Mr Relf, who is now the chief risk officer of a leading building society but has fully retained his youthful interest in wine — or viticulture, if we’re being formal.

His tasting notes for the Sancerre highlighted its “smooth, buttery minerality”. The wine, in his view, was “clean, dry and fresh; mellow and yellow”.

However, when it came to the Sauvignon Blanc, Phil’s verdict was more severe.

He wrote: “While I like the idea of a biodynamic organic vineyard with wildflowers, bees and cows roaming, they have got this wine a little wrong in my opinion. Marlborough Sauvignon Blanc should be clean, herbaceous and tropical fruit, but this wine has some oak and is too acid. Not my preferred style.”

One of the most enjoyable aspects of the dinner, which was held in the hotel’s Canata dining room, was its highly social nature.

While the diners arrived separately or in pairs, once seated around the table we were encouraged by Nadia to get to know one another and to share our views on the wines and how they paired with the food — among other topics of discussion.

The next course was a pressed chicken terrine with carrot purée and crispy mustard chicken skin.

This, for me, was one of those rare dishes that proved actually as delicious in real life as it had sounded on the menu card.

This time we were invited to assess the merits of a Chablis, Domaine des Marronnieres, from France, and a Journey’s End Single Vineyard Chardonnay from South Africa.

Of the two, Phil favoured the Chablis, writing of the Journey’s End Chardonnay: “Personally, I felt that the oak in this wine kills the fruit, but I can see that this richness does work well with the food and is a fine example of this style. It’s just not to my taste.”

By contrast, the Chablis was: “Simple, calm, balanced and easy on the palate. The flavour is almost green or underripe. Again, once the food is added, the wine really comes into its own. It’s not heavy on the fruit or the acid, but lets the food shine.”

These were paired with, respectively, a Crozes Hermitage Rouge, Les Jalets Paul Jaboulet Aine, from France, versus a Charles Smith Boom Boom Syrah from the USA, and a Royal Tokaji Blue Label from Hungary versus a Stratus Riesling Icewine from Canada.

By this stage of the evening, I confess, my own palate was growing markedly less discerning — I may even have been a little “sideways”, as they say in California — but it was still possible to work out which wine was to be preferred to its companion and which went best with which dish.

Phil, for the record, particularly approved of the Boom Boom Syrah, noting that: “With the main dish, fantastic blackberry and spicy black pepper really cut through the fatty rack of lamb. The food loves this full-bodied blockbuster and so do I. My favourite wine of the evening.”

He was also impressed by the Stratus Riesling, writing: “This Canadian Icewine does something I have not experienced in dessert wine.

“It somehow starts floral and takes you on a journey in the mouth to a sweet finish. This slightly lighter style really goes well with the mousse.”

If you’re looking for a good place to think about drink, a former Brakspear brewery such as the Hotel du Vin is not a bad place to start.

We had been greeted at the start of the evening by Nadia, who explained the format and took care of the introductions.

Gathered in the courtyard with the sun still slanting down, we were invited to sample a Prosecco — the Valdobbiadene Brut Crede Bisol NV — accompanied by a selection of canapés that included some deliciously succulent king prawns.

Phil’s verdict on the Prosecco? “Full-flavour pear, a burst of bubbles and just a touch of bready after-tones. An elegant start to a fine evening.”

Happily, more such evenings are in store at the Hotel du Vin this summer.

On Friday, June 2, the next wine dinner in the calendar will be hosted by Donald Ealand, the general manager of the Chiltern Valley Winery and Brewery at Hambleden.

He will be introducing diners to some fantastic local English wines paired with five courses and discussing Chiltern Valley’s passion for producing quality wines. Then on Friday, September 1, a “Call My Quaff” wine dinner is in store.

Hosted by Quentin Jones of New Generation Wines, this is billed as a fun night of tasting where you are invited to guess the wine that has been expertly matched to the Hotel du Vin’s five-course seasonal menu.

Quentin will compère while three “experts” try to convince you that the wine you are sampling is the one they are describing. How hard can it be?

Both wine dinners are £75 per person, including arrival champagne and canapés followed by a five-course menu paired with wines.

For more information or
to book, call the Hotel du Vin’s events team direct on (01491) 877579 or email events.henley@hotelduvin.com

Hope for campaigners as pub owner wants to sell